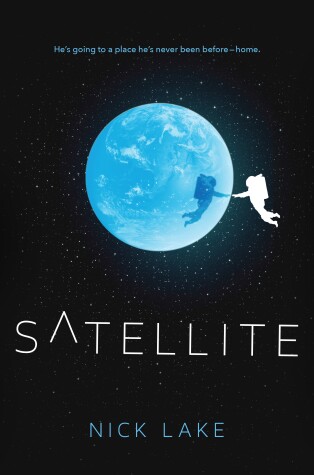 A teenage boy born in space makes his first trip to Earth in this engrossing sci-fi adventure for fans of The Martian from award-winning author Nick Lake.

He’s going to a place he’s never been before: home.

Moon 2 is a space station that orbits approximately 250 miles above Earth. It travels 17,500 miles an hour, making one full orbit every ninety minutes. It’s also the only home that fifteen-year-old Leo and two other teens have ever known.

Born and raised on Moon 2, Leo and the twins, Orion and Libra, are finally old enough and strong enough to endure the dangerous trip to Earth. They’ve been “parented” by teams of astronauts since birth and have run countless drills to ready themselves for every conceivable difficulty they might face on the flight.

But has anything really prepared them for life on terra firma? Because while the planet may be home to billions of people, living there is more treacherous than Leo and his friends could ever have imagined, and their very survival will mean defying impossible odds.

Satellite is one of those books that surprise you - to be completely honest, I don’t have a lot to say about the book, but I also kind of loved it. It’s one of those reads that sneaks up on you, that you think might just be an okay read, but actually turns out to be amazing, a read that makes you emotional and a read that even makes you cry. (And not because of the horrific way the book is written, but I’ll get to that.) It’s like a contemporary space book, if there’s such a thing. It isn’t a fantasy, it isn’t a space-opera, it’s just a contemporary book that happens to be set (partly) in space.

Satellite is actually an incredibly simple read, and an incredibly simple concept: Three teens were born in space, told they couldn’t come to Earth until they were 16, when they would be deemed strong enough to complete the journey home, and it’s about their adjustment back to Earth. It’s narrated entirely by Leo, and while it spends ages actually getting to the main crux of the plot, I was never actually bored. I loved reading about Moon 2, the space station where Leo, Orion and Libra live. I love the idea of being able to view Earth from space, even if it also kinda creeps me out because YOU ARE NOT ON EARTH. That is just genuinely terrifying. I love the *idea* of space, but could I actually go there? Probably not. I’d be too chicken, all things considered. But I’m OK with that.

It was also fascinating to see how Leo adjusts to being on Earth - his whole life has been in zero gravity, where he can swim in the air to get where he wants to go, where there’s no concept of down; so to have to relearn everything, simple things like walking while gravity is pulling you down was fascinating, especially since I know no different. Walking, sleeping, moving, it’s how I’ve always lived so to see it through Leo’s eyes was incredible. You don’t really appreciate how beautiful the Earth is, on a daily basis, but seeing it through Leo was something else. Small little things amazed him, and his love for bacon made me laugh. It was those small little things that made me pause whilst reading this book. And I can’t even talk about Comet. Nope, I am not doing it.

The thing that bugged me most about Satellite is the writing. I don’t know if this is how Nick Lake always writes, Satellite is my first book by him, but for some bizarre, unknown reason Leo only ever used capital letters for people’s names. And he never used the full version of you, instead he used u/u’re/ur. Ditto c for see. And thru for through. And, the worst of all, because it’s so distracting to the eye, he used the & sign instead of and. AND IT’S NEVER EXPLAINED. There is no explicit reason for why the book is written in this way. It’s not like that’s how Leo learned to write, and he managed to capitalise names, so why did Nick Lake write like that? WHY, WHY, WHY? I genuinely didn’t understand it. Unless there’s a good reason for it, it comes across as lazy.

I actually really enjoyed Satellite, text speak aside. I thought this was an emotional read. It made me wonder how I would cope if I had been born in space. (Hint: probably not well.) It made me think about what we take for granted. Everyday things like walking. Seeing a beautiful sunset or sunrise. Appreciating the beauty all around us. And I know that’s twee and airy and all those things, but we don’t appreciate our Earth enough, we’re too busy raging at everyone and everything. I would definitely read more from Nick Lake, because this kept me reading pretty much from start to finish. As soon as I read the synopsis, I knew it had to be my next read and I couldn’t stop thinking about it. It was gripping, and incredibly emotional so keep the bloody tissues handy.