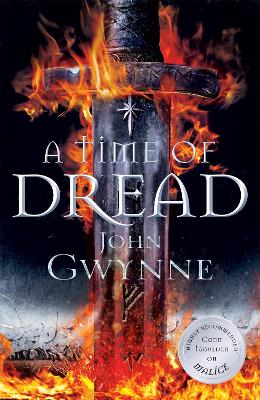 'A Time of Dread reminds me of why I became a fantasy enthusiast in the first place' – Robin Hobb, author of Assassin's Apprentice.

Set in the same world as the Faithful and the Fallen quartet, the first novel in John Gwynne's Of Blood and Bone series, A Time of Dread, takes place one hundred years after the end of Wrath.

The Ben-Elim, a race of warrior angels, once vanquished a mighty demon horde. Now they rule the Banished lands. But their dominion is brutally enforced and their ancient enemy may not be as crushed as they thought.

In the snowbound north, Drem, a trapper, finds mutilated corpses in the forests – a sign of demonic black magic. In the south, Riv, a young, tempestuous soldier, discovers a deadly rift within the Ben-Elim themselves.

Two individuals with two world-changing secrets. But where will they lead? And what role will Drem and Riv play in the Banished Land's fate? Difficult choices need to be made. Because in the shadows, demons are gathering, waiting for their time to rise. . .

Continue the heroic fantasy series with A Time of Blood.

'A truly excellent read . . . Exciting, well-written swords and sorcery. Try it on for size' – Mark Lawrence, author of The Broken Empire.

'John Gwynne is one of the modern masters of heroic fantasy' – Adrian Tchaikovsky, author of Children of Ruin.

Meh I read this over the weekend and honestly it didn't really make much of an impression on me. I honestly feel no urge to read further in this series, don't get me wrong I wouldn't refuse to read more in this series, I just feel no real urge to keep reading here. I don't really remember much about the book.A race of warrior Angels defeated a demon horde. Now the demons, with their human allies, are looking to break free from their magical prison and take over. The story follows several parties all of whom are being set up in this story for something later, all of whom have secrets which I'm sure will eb pivotal later.
I didn't really connect with any of the characters and while I was curious to know what was going on I didn't really care what happened to any of the characters. It was possibly just the mood I was in while reading it but it was not really my thing.
This was awesome. I loved Gwynne's first series and this continuation is just as great!
I think AToD is a great start for a new series, with a lot of action, interesting plot and great - SO GREAT - new characters.
When I read a book with different PoVs I always struggle with one or two of them, but this time all the 4 characters that we follow were very interesting, even Drem, whom at first I didn't care for.
Riv's and Sig's stories were my favorite and I sincerely hope Cullen will be more prominent in the future 'cause he was so funny and endearing to read!
Corban and Coralen would be proud!

Of Blood and Bone (3 books)