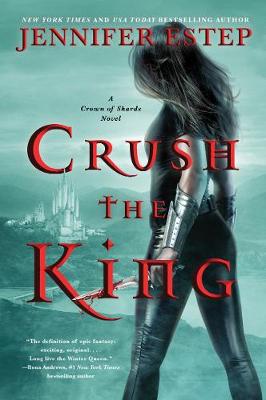 A fierce gladiator queen must face off against her enemies in an epic battle in this next thrilling installment of New York Times and USA Today bestselling author Jennifer Estep’s Crown of Shards series—an action-packed adventure full of magic, murderous machinations, courtly intrigue, and pulse-pounding romance.

Queen Everleigh Blair of Bellona has survived the mass murder of the royal family, become a fearsome warrior trained by an elite gladiator troupe, and unleashed her ability to destroy magic. After surviving yet another assassination attempt orchestrated by the conniving king of Morta, Evie has had enough. It’s time to turn the tables and take the fight to her enemies.

There is no better opportunity to strike than during the Regalia Games, a time when warriors, nobles, and royals from all the kingdoms come together to compete in various sporting events. With the help of her loyal friends, Evie goes on the attack at the Regalia, but things don’t turn out the way she hopes. Soon, she is facing a terrifying new threat, and she will have to dig deep and learn even more about her growing magic if she has any chance of defeating her foes.

Because to secure her throne and ensure her kingdom’s survival, Evie must think like a true Bellonan: she must outsmart and outwit her enemies . . . and crush the king.

I still enjoyed this book immensely, but it felt a little disjointed compared to the rest of the series.

For example, in the first two books, Sullivan felt like a major character, and the whole romance plot felt significant. There was a lot of drama and tension getting those two together. Then FINALLY they get together and.... Sullivan disappears. He's just faded into the background. Technically they're together, but you'd never know it. He does NOTHING. He barely even says anything. And I'm fine with a book not having romance, but it's confusing to be led to think this is a "fantasy romance" in books one and two, then to have that "romance" part suddenly disappear in book three. I guess I just like a series to be consistent. Otherwise it feels disjointed.

I also feel like none of the other characters really developed. Some of them got there halfway, but never fully blossomed into anything significant. I guess that's because the main character has an issue with wanting to do EVERYTHING herself. That means she's the only one who does anything. She has a body guard who never guards her because the MC always gets attacked when she's completely alone, then kills the assassins by herself. It just feels like a wasted opportunity. The side characters are interesting, they just aren't given enough chance to fully develop.

Also this didn't feel like the conclusion to the series. I guess it still hasn't been solidified how long this series is meant to be, and given how long some of her other series are, it's entirely possible this one will continue to grow. However, I don't love going into a series not knowing how long it will be. You never know if the end is actually the end.

All that being said, this was still very enjoyable!
Gads that was good. Full RTC
I loved that Crush the King included the Regalia Games because what a way to circle back to the gladiator days that all fans of this series enjoyed! There was no better place to bring out the truth of what had been taking place for queen Everleigh Saffira Winter Blair of Bellona because it was a great platform for a confrontation! There was plenty of action and machinations taking place leading up the games but my love for this book increased once Everleigh and the crew made it to Fortuna Island, where the event was taking place.

With all the kingdoms gathered for the competition it was finally time for the readers to meet Everleigh’s nemesis, Maximus Mercer Moreland Morricone, the king of Morta. What a truly despicable villain! He was the kind of character that I love to loathe. What a perfect enemy! I know that I was rooting for Everleigh to finally have her chance for a face to face confrontation with the king of Morta and, wow, did this story deliver. Everleigh thought she was ready for anything but Maximus was more cunning than she could have anticipated and the Bellonan’s were going to have the fight of their lives to survive what he and his cohorts had to dish out.

There were many exciting and nail-biting moments in Crush the King! I enjoyed that I was kept in suspense as Everleigh and her friends tackled one battle after another. Her character had grown so much over the course of this series and it was wonderful to see her finally starting to have the confidence that she needed to be queen. I will say there were some parts of this book that did drive me a little batty, like Everleigh’s constant referencing in regards to emotional scents and the long game she was playing, I could have done with less of those comments. What I missed the most was Sullivan. He was a great supporting character but I really expected more with him in this book. Overall though, Crush the King was a captivating page turner that was a satisfying series ending book but one that left room for spin off books, let’s hope for that.

Queen Everleigh Blair of Bellona and friends head off to their most continuous battle yet, the Regalia Games, in this incredibly boring conclusion to the Crown of Shards series.

When I saw this available on Edelweiss last fall, I requested it as quickly as possible. Once I received it, I tried to read it. Put it down after 5%, tried a month later. This went on until February when I finally said “just read the dame thing.” I read it to 50% before scanning it to the finish.

Evie should be a fascinating character – she’s survived a massacre to become queen of the kingdom, she’s a political strategist, and she’s even a freaking gladiator. Despite all of these interesting dichotomies, Evie is boring. Her magic always grows to match her particular circumstances, meaning she rarely comes across an enemy she can’t beat. She spends the majority of the novel focused on herself or her enemies, meaning side characters we’ve enjoyed in the past tend to get lost. Where the hell was Sullivan? He’s around, appearing magically for a few minutes to disappear for pages. It was so disappointing.

The other issue is the descriptive world building. I’ve noticed this before in other Estep novels – she over shares details about her worlds. She details to the nth degree the clothing, the architecture, the food, etc. I don’t need to know ever single detail about each location or culture. Pair it down to the basics to make the descriptions impactful.

tl;dr Disappointed in the last book as it’s bogged down by world building and the main character’s boring evolution.
These days, with kids and work and and and - it's rare that I end up staying up past my bedtime to read a book. And when I do, it's because the book is just that engrossing *and* because I always vastly underestimate how long it will take me to finish whatever I'm reading. Such was the case here. I had to work this morning, bright and early. My daughter wanted to sleep with me last night, which meant going to bed early as well. But there I was, at 12:45, turning the last page on my Kindle - in the dark, under the covers, my daughter sleeping next to me and the thunder sounds she had requested rocking the room. Though admittedly, the thunder was a *fabulous* soundtrack for the latter half of the book.

In Crush the King, we find Evie (Queen Everleigh) still besieged by assassins, and it seems everywhere she turns, there are more. Finally deciding she's had enough of playing defense, she goes on the offense and brings the battle to Regalia Games (similar in spirit to the Olympics). When it all comes down to life or death, Evie is will to sacrifice everything in order to Crush the King.

It's a great continuation of the series, and Evie gets better and better as a character. She's not...static. She learns and adjusts and takes the hits sometimes too. The book's (no spoilers!) ending was *perfect*, though I will say that it leaves enough open that another book could theoretically be possible. My understanding is that this is a trilogy, however it's not unheard of for that to change if books are doing well.

Overall, if this IS the end - it's been a helluva ride. There's strength in physicality - but there's *also* strength in wits and honor. Queen Everleigh Blair demonstrates that playing the long game can devastate your opponent as much as beating them on a battlefield.