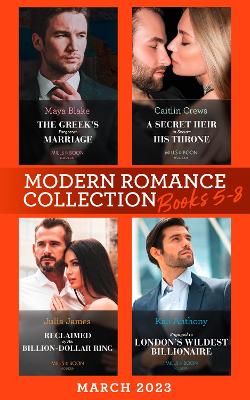 Things are warming up with Mills & Boon!

A vow to reclaim his bride!

Imogen has finally tracked down her missing husband Zeph. But he has no recollection of their business deal union! As Zeph slowly pieces his memories together one thing is for certain. This time an on-paper marriage won’t be enough!

A Secret Heir to Secure His Throne
By Caitlin Crews

The key to his royal future!

Grief-stricken Paris Apollo is intent on getting revenge for his parents’ deaths. And he’s just discovered a shocking secret: his son! A legitimate heir will mean a triumphant return to power—if Madelyn will marry him…

Reclaimed by His Billion-Dollar Ring
By Julia James

Her body can’t forget him

It’s been eight years since Nikos left Calanthe without a goodbye. Now becoming the Greek’s bride is the only way to help her ailing father. Even if it feels as if she’s walking back into the lion’s den…

Scandal I can do…'

Lance’s reputation for debauchery is the stuff of tabloid legend. But entertaining thoughts of his attraction to sheltered Sara would be far too reckless. Then she makes him an impassioned plea to help her escape an arranged wedding. His solution? Their own headline-making engagement!