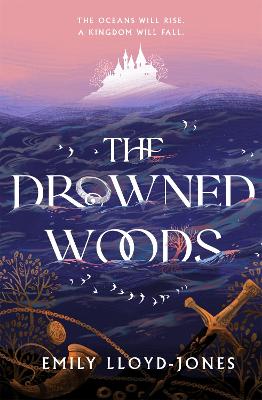 The right cause can topple a kingdom . . .

Once upon a time, the kingdoms of Wales were rife with magic and conflict - and eighteen-year-old Mererid 'Mer' is well-acquainted with both. As the last living water diviner, she can manipulate water with magic - a unique elemental power many would kill to possess.

For years, Mer has been running from the prince who bound her into his service - and forced her to kill thousands with her magic. Now, all Mer truly wants is a safe, quiet life, far from power and politics.

But then Mer's old handler - the king's spymaster - returns with a proposition: use her powers to bring down the very prince that abused them both.

Illumicrate edition. Signed by the author with stencilled sprayed edges.

Inspired by the myth of Cantre’r Gwaelod, a sunken kingdom off the coast of Wales, that has been described as the “Welsh Atlantis”, this fantasy from Emily Lloyd-Jones is a part heist, part dark fairy tale, set in the same world as The Bone Houses, but with a whole new cast of characters.

As the last living water diviner, the eighteen-year-old Mererid “Mer” has spent years running from the prince who bound her into his service. When Mer’s old handler returns with a proposition, she is resolved to use her powers to bring down the very prince that abused them both. The best way to do that is to destroy the magical well that keeps the prince’s lands safe. With a motley crew of allies, including a fae-cursed young man, the lady of thieves, and a corgi that may or may not be a spy, Mer may finally ‌be free and in peace with herself. At least, it’s what she hopes.

The prologue sets up the book nicely, and the epilogue is also beautifully written, but the overall pacing of the story is very slow. There are too many supporting characters that are only present for the sake of the plot but don't really add anything to it. Although Mer has one of the best opening lines ever, I feel like I didn't know her well enough to get attached to her, and even though I was heartbroken before I got to the end, I didn't cry drool and snot-like I usually do. Still, I liked the tension felt between Mer and Ifanna and the (maybe a little too very) slow burn with Fane.

I'm sorry that, with such a good premise and a cast of characters that had everything going for it, the author or publisher decided that this should be just a stand-alone. The political issue could have made this story more than a disappointing heist. Despite this, the writing is really beautiful ‌with some deep thoughts, especially regarding how oppressive regimes act. Somewhat thought-provoking, it also addresses the power of sacrifice for the greater good.

I received an eARC for free, through NetGalley, and I am leaving this honest review voluntarily.