by Judy I. Lin 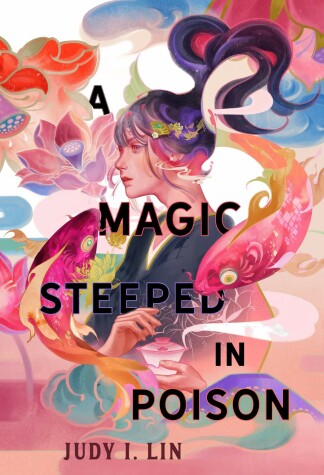 by Judy I. Lin

Judy I. Lin's sweeping debut A Magic Steeped in Poison, first in a duology, is sure to enchant fans of Adrienne Young and Leigh Bardugo.

I used to look at my hands with pride. Now all I can think is, "These are the hands that buried my mother."

When Ning hears of a competition to find the kingdom's greatest shennong-shi—masters of the ancient and magical art of tea-making—she travels to the imperial city to compete. The winner will receive a favor from the princess, which may be Ning's only chance to save her sister's life. But between the backstabbing competitors, bloody court politics, and a mysterious (and handsome) boy with a shocking secret, Ning might actually be the one in more danger.

This is such a beautiful book. From the gorgeous cover, to the beauty that lies within the pages, this is a book that is truly art. A Magic Steeped in Poison is the first in The Book of Tea duology, soon to be followed by A Venom Dark and Sweet.

The book reads like mythology, set a world that the author paints vividly. It’s very lyrical, almost having the feel of a song. The use of tea as a magical system is intricate and fascinating, weaving culture and fantasy together in such an engrossing way. The shénnóng-shi, essentially masters of their art, are the wielders of tea magic. Ning is a commoner, her mother a shénnóng-shi in their small village. Once they were far from the treachery of the Court, but someone has been poisoning tea leaves, spreading them around the country and creating unrest. Ning’s own mother has succumbed to the poison, and now her sister is ill, too. Her only choice is to find her way to the Court to take part in an intense competion, the prize being the honored position of shénnóng-shi of the Court. But Ning quickly realizes there is more at play than the cutthroat competition.

There are so many elements to love beyond the beautiful prose. The use of tea-making as the basis of magic is so unique, something that is an inherent part of Asian culture. The magic of it is found just as much in the ingredients the practioner uses as it is in the ritual itself, which felt very appropriate and beautiful. And there are hints of romance for Ning, even as she’s staked everything on winning the competition. There’s a certain beauty in seeing her burgeoning friendship with Lian, her roommate and fellow competitor. And it was wonderful to watch her grow in a world of which she’s never seen even a hint, learning and experiencing beyond the borders of her small village. But there are dark moments as well, those of intrigue, secrets, betrayal, and fear of failure. All of it weaves together a story that is impossible to put down.

'A Magic Steeped in Poison' by Judy I. Lin is a killer blend of Asian mythology and tradition.

Elegantly written, the prose is filled with just the type of lyrical language one would expect, and sprinkled with quotable lines. It's an excellent representation of the artistry and complexities of the cultures which help shape the story.

Though I found most of the mystery to be predictable, the author still does a good job of leading the reader through the paces of discovery.. and if I'm being honest, I really feel like the tea magic is where it's at for this story. Lin's magic system is a fascinating departure from the usual in modern fantasy and her descriptions of Ning's specific gift of magic is probably my favorite aspect of the whole book.

I enjoyed the way that due to the competition, we also got a glimpse of life in various provinces across the kingdom, rather than just the imperial city or Ning's own town. It made the world Lin created feel fuller, distinguishing not only between the citizens of the city itself.. but also shedding light on those very realistic kinds of regional biases one might see in a large country.

The story itself has plenty of tense moments, romance, and enough political machinations to keep the pace moving at a steady clip.. even when the telling diverges from the main path. There are numerous characters that we experience only briefly, but they're textured richly and make their mark, adding more layers to Lin's already robust world-building.

If you're looking for a tale bursting with creative magical elements, palace intrigue, and threat of heavy consequences.. this is the book for you.