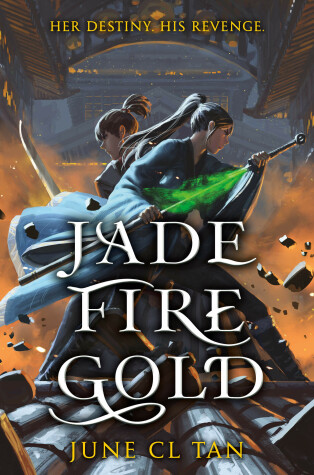 In order to save her grandmother from a cult of dangerous priests, a peasant girl cursed with the power to steal souls enters a tenuous alliance with an exiled prince bent on taking back the Dragon Throne. The pair must learn to trust each other but are haunted by their pasts—and the true nature of her dark magic.

Told in a dual pov narrative reminiscent of EMBER IN THE ASHES, JADE FIRE GOLD is a YA fantasy is inspired by East Asian mythology and folk tales. Epic in scope but intimate in characterization, fans of classic fantasies by Tamora Pierce and the magical Asiatic setting of AVATAR: THE LAST AIRBENDER will enjoy this cinematic tale of family, revenge, and forgiveness.

I was lucky enough to get a beautiful copy of Jade Fire Gold with my October OwlCrate box, and let me tell you – it is stunning! Then again, I'm a sucker for sprayed edges, so that probably is no real surprise. Jade Fire Gold is the debut novel of June C.L. Tan, and I am already looking forward to more of her work.

Ahn and Altan both live in a world on the verge of breaking apart, all thanks to greed and war. Yet they each see different sides of this suffering. It will take the two of them coming together for them to stand a chance at saving their people.

All Altan desires is to find a path back to the throne – and getting his revenge. He sees Ahn as his potential way forward. Meanwhile, Ahn is terrified by the powers growing inside her, which has resulted in her being thrown into a world unfamiliar to her.

"You may not be able to change the past, but with each action, you can change the future."

Wow. Jade Fire Gold absolutely lived up to the hype I built in my head. Given the cover, description, and comparison promises (The Bone Witch crossed with We Hunt the Flame? Yes, please!). But I was still blown away by what I found here.

Okay, I'll admit that part of the reason why I ended up loving Jade Fire Gold so much is that it had some pretty strong Zutara vibes (my favorite ship from Avatar: The Last Airbender, for those that are confused). But it's so much more than that! This novel is very much capable of standing on its own, despite how many comparisons we readers have been tempted to make.

The world June C.L.Tan created here is wonderful, complex, and something I am desperate to see more of. Thankfully, I don't think I'll have to say goodbye to the world or characters anytime soon, as I think there is a sequel on the horizon.

Jade Fire Gold has a ton of familiar tropes woven into the narrative. I enjoyed the creative take on it all. There's elemental magic, Chinese mythology, the classic "I have to kill you" saga, all with a dash of "chosen one" drama. It makes for a lot of fun!

The romance is a bit of a slow burner here, admittedly. Again, I didn't mind that. I was too busy getting engrossed with the world and a dozen or so other plots. But I can see how it would leave some fans disappointed.

Overall, I would absolutely say that Jade Fire Gold is worth reading, especially for fantasy and YA fans out in the audience. Not to mention those that are still stinging from their Zutaran loss.

Felt a little predictable but still a wonderful debut novel! Absolutely loved the characters. Can’t wait to see what else she comes out with. Really liked the alternating pov from Ahn and Altan.