Half Sick of Shadows 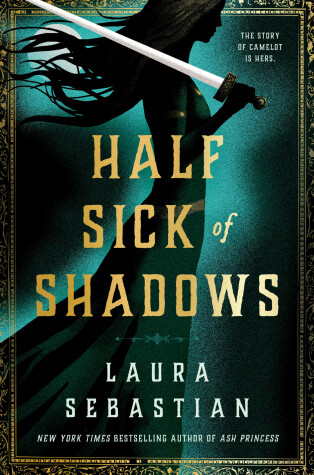 Half Sick of Shadows

"Laura Sebastian is the next Madeline Miller. . . . a fierce, fresh, lyrical tale that will enthrall until the last page."--Kate Quinn, New York Times bestselling author of The Huntress

"Magical, haunting, unique--I haven't been so excited about an Arthur book since I read The Once and Future King ."--Tamora Pierce, #1 New York Times bestselling author

The Lady of Shalott reclaims her story in this bold feminist reimagining of the Arthurian myth from the New York Times bestselling author of Ash Princess.

Everyone knows the legend. Of Arthur, destined to be a king. Of the beautiful Guinevere, who will betray him with his most loyal knight, Lancelot. Of the bitter sorceress, Morgana, who will turn against them all. But Elaine alone carries the burden of knowing what is to come--for Elaine of Shalott is cursed to see the future.

On the mystical isle of Avalon, Elaine runs free and learns of the ancient prophecies surrounding her and her friends--countless possibilities, almost all of them tragic.

When their future comes to claim them, Elaine, Guinevere, Lancelot, and Morgana accompany Arthur to take his throne in stifling Camelot, where magic is outlawed, the rules of society chain them, and enemies are everywhere. Yet the most dangerous threats may come from within their own circle.

As visions are fulfilled and an inevitable fate closes in, Elaine must decide how far she will go to change destiny--and what she is willing to sacrifice along the way.

Are you looking for a completely different sort of Arthurian retelling? Good news, Half Sick of Shadows, written by Laura Sebastian, will certainly fit that bill!

We all know how the story goes. Arthur is destined to be king. Guinevere and Lancelot betray him. Morgana turns against the lot of them. And then there's Elaine of Shallot, the seer forced to witness it all countless times.

This is not quite that story. Well, the latter part is certainly true. Echoes from the future haunt Elaine; that fact will never change. Yet this isn't quite the Camelot we're used to seeing, nor are the characters that fill the pages.

“Heartbreak isn't as lethal as the name implies, you know. Maybe it feels that way at the time, but I swear it isn't. You've seen Gwen and me both rebound from it eventually. I don't regret anything leading up to it, and I doubt Gwen does either. It's life, Elaine. Getting hurt, picking yourself up, trying again. You're so focused on the ending sometimes that I don't think you know how to appreciate the during.”

Somehow, Half Sick of Shadows was everything and nothing like what I expected. Is it a feminist retelling? A hundred times yes. Is it the Arthurian retelling I keep hoping for? Maybe not so much.

To be fair, part of why I wasn't head over heels here might simply be because I am growing tired of Arthurian retellings. So that is totally on me for picking up this book despite that feeling. I just couldn't resist the promise of a feminist twist.

On that part, Laura Sebastian really did deliver. Elaine truly does take charge of her fate here. She isn't some shy or passive woman. Better yet, she doesn't merely go along with the story. And she certainly isn't passive in terms of her future or the fate of those she cares about.

However, Half Sick of Shadows ended up reading like it was intended for a much younger audience. You could pick up many of the characters and plots here, drop them in a high school setting, and they wouldn't have been that out of place.

Additionally, I did not love some of the twists Sebastian worked into the narrative. Specifically, the one about Guinevere. Why can't she just be strong and stubborn all on her own, without having some massive twist to explain it away? Normally I wouldn't gripe on that, but this did promise to be a feminist retelling, and I feel like that part missed the mark.

Otherwise, though, it really did nail that. All of the ladies in this tale are confident and capable and are nowhere near being pawn pieces for the rest of the narrative. For that reason, I could never bring myself to actively dislike this story.