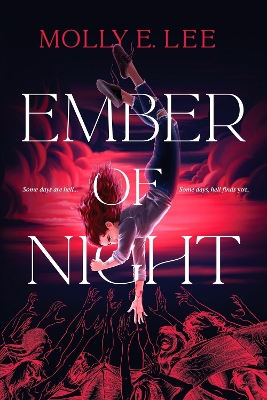 Harley Locke is no stranger to darkness, but when the irresistibly hot and broody new guy crashes into her world, she isn't sure she'll survive him.

She has one year before she can take her kid-sister and escape their volatile home life, and she'll do anything to protect her-including accepting her supernatural heritage that has every demon in Chicago chomping after her rare blood.

Draven Reid has spent the better part of a century searching for the Key to opening the Gates of Hell so he can rescue his wrongfully imprisoned twin brother, and he's prepared to shed blood to do it. But soon the person he's prepared his whole life to kill turns out to be the one person who makes him feel alive.

Dodging an abusive father, demons prepared to drain her dry, and a newly formed love that may be the death of her, Harley will have to decide on her own what's worth saving: the world that has done nothing but chew her up and spit her out, or the boy whose stolen her heart, but has a blade with her name on it.

I am going to start this review with a warning. There are graphic scenes of child abuse in Ember of Night. Not only did it trigger me, but I was shaking mad at every adult in the book (including Harley’s boss). How many black eyes and burn marks can you see before thinking, “Well, maybe something is going on, and I should get involved.” Shame on them (and yes, I was invested emotionally at this point). Because of how graphic the abuse got (in one scene, Harley’s father beats her unconscious), I highly recommend that older teens read this book.

Before you all go, “Oh wow, graphic abuse, yeah, not for me,” I do want to add that the author did mention the abuse in her author’s note, AND she gave resources out if you/someone you know is being abused. So a huge kudos to her for not only the warning but for making those resources available at the beginning of the book.

Harley was my hero for the entire book. Understandably, she had almost no self-esteem, and there were times where she wanted to commit suicide. But, she had a lifeline. She had her 7-year-old sister, Ray, to protect and take care of.

Harley dealt with the supernatural part of the book better than I would have. I mean, she was attacked by three different types of demons, found out that her martial arts instructor was a demon, and learned what Draven was all within an afternoon. I would have been in a corner, sobbing my eyes out and rocking back and forth. But not Harley. She went out and kicked ass (all while making sure that Ray was safe).

I loved Draven too. He was hot and broody. He had an instant connection with Harley that he tried to ignore. I mean, he was supposed to find out if she was the Key (it is explained in the book) and then kill her if she was. He wasn’t supposed to develop feelings for her or protect her from the demons trying to get at her. His backstory was even more tragic than Harley’s. He wasn’t abused like she was, exactly. Instead, he was an outcast because of his unique abilities.

Harley and Draven’s romance was sweet. They were not looking to fall in love with each other. There were sparks whenever they were together. I expected them to admit their feelings sooner but was pleasantly surprised when it happened later rather than sooner.

There is sexual content in the book. Harley and Draven do get together in Ember of Night. The author does a great job of leading up to them having sex with some heavy petting scenes before ending the chapter. It wasn’t graphic, but it was implied.

The main storyline was well written. The author did a fantastic job of keeping me guessing at what Draven was going to do when Harley grew into her powers. A massive twist in that plotline (involving Harley’s father) took me 100% by surprise. I had to put down my book and take a minute to process it, and it was that big of a surprise.

Several more minor storylines were well written and were successfully merged into the main storyline by the end of the book. These secondary storylines fleshed out certain characters and explained why certain people did things in the book.

The author did a fantastic job of creating a complex and diverse world where demons and angels intermingled with humans. I couldn’t get enough of the different races of demons or angels.

The end of Ember of Night was a shock. Not only because of the big battle scene, which was truly magnificent, but with what was revealed.

My only complaint about the ending was it was a cliffhanger. I hate cliffhangers!!!

I enjoyed reading Ember of Night. It was a well-written book that kept me glued to the pages.

I would recommend Ember of Night to anyone over the age of 16. There are graphic child abuse scenes. There is implied sex. There are scenes of heavy petting. There is violence, and there is language.

I voluntarily reviewed an Advance Reader Copy from the Publisher. This does not affect my opinion of the book or the content of my review.Ember of Night by Molly E. Lee is different from other young adult paranormal books out there.

Can Harley get Ray safe and try to save the world from being destroyed...by her?

Harley is our point of view character, and I have to say that I felt bad for Harley. She gets abused a lot by her father and is trying to keep Ray safe from harm. Honestly, that is a hard thing to do, especially in a trailer. Harley lives in Chicago, and once she turns eighteen, Harley will get Ray to safety. Except her unknown paranormal life gets in the way of that. Harley discovers on her eighteenth birthday that her blood might be the Key to ending the world, exactly what any girl wants to hear while battling demons.

Throughout the book, we follow Harley on her journey of learning about this new life while discovering that not everything is what it seems. Harley has a lot to learn and in a very short time span since she has to get an apartment, file for custody for her little sister, and keep her job at Miller's. Oh, wait, that's not all she has to learn to control her new powers while making sure to keep alive and not set free a demon.

Harley is very selfless in that she will put herself in danger to keep her little sister safe. In her whole world of darkness, the only thing that is light in it is Ray, who she can't allow to be sucked into this unfair paranormal world that Harley is now a part of. All of that is a great thing to admire in character. She overcomes her upbringing and embraces her future. I can relate to this character, as when I was younger, we have some similarities, but now I am in a better place in my life. This is something that I'm thankful for all the time. I really like Harley. She has so many things against her, and yet she continues to fight for herself and Ray. I hope in the next book that Harley is ready for the fight of her life.

Ember of Night by Molly E. Lee was an enthralling and enchanting book. It swept me away. Harley's fight is just getting started, and that is actually sad. Ms. Lee does a fabulous job crafting this book together, and I love Harley and Draven together. The baddies are so awesome, and I had a hard time guessing who the Second could be. I kept second-guessing myself about that. The next installment is going to be interesting. I can't wait. I am giving this four stars and recommending it to any of the young adult paranormal readers out there.

Thank you for dropping by! I hope you enjoyed this review of Ember of Night by Molly E. Lee.

Until the next time,