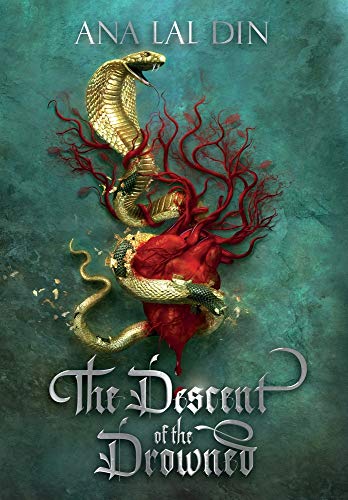 She is bound to serve. He is meant to kill. Survival is their prison. Choice is their weapon.

As the sacred slave of a goddess, Roma is of a lower caste that serves patrons to sustain the balance between gods and men. What she wants is her freedom, but deserters are hunted and hanged, and Roma only knows how to survive in her village where women are vessels without a voice. When her younger brother is condemned to the same wretched fate as hers, Roma must choose between silence and rebellion.

Leviathan is the bastard son of an immortal tyrant. Raised in a military city where everyone knows of his blood relation to the persecuted clans, Leviathan is considered casteless. Lowest of the low. Graduating as one of the deadliest soldiers, he executes in his father's name, displaying his worth. When he faces judgement from his mother's people-the clans-Leviathan must confront his demons and forge his own path, if he ever hopes to reclaim his soul.

But in the struggle to protect the people they love and rebuild their identities, Roma's and Leviathan's destinies interlock as the tyrant hunts an ancient treasure that will doom humankind should it come into his possession-a living treasure to which Roma and Leviathan are the ultimate key.

Set in a colonised Indo-Persian world and inspired by pre-Islamic Arabian mythology, The Descent of the Drowned is a tale about power, identity, and redemption, and what it takes to hold on to one's humanity in the face of devastation.

I received a copy of The Descent of the Drowned in exchange for a fair and honest review.

The Descent of the Drowned is Ana Lal Din's debut novel, and it is an absolute must-read book! It blends young adult fantasy, mythology, and the pain and dangers of the real world in one beautiful, harrowing, and moving read.

Roma was given to the service of the goddess at a very young age. It made her of a lower caste, and forced her to serve to the whims of gods and men. This is not the life she would have chosen for herself. Or anyone, for that matter. There is fire in Roma's soul, and she's willing to fight for her freedom.

Leviathan is also willing to fight, but he comes from a very different background. His father is a tyrant, and his mother from a clan everyone else looks down upon. The end result is a man with torn loyalties, and a fierce understanding of the need to protect.

The Descent of the Drowned is very much a fantasy novel, yet it has real-world foundations. It is set in a colonized Indo-Persian world, and tries so hard to make the horrible actions of humans feel both real and approachable.

“She wanted too shout at him to spring the ashes and allow the tempestuous winds to snatch them – anything but the impending doom.”

The Descent of the Drowned is a thrilling yet heartbreaking tale, one that makes brilliant use of mythology to bring some very important – and real – concerns to light. In that way, it was incredibly powerful and human – both the good, and the bad.

The novel is told through the use of two different perspectives, as you might have guessed. First, there's Roma. I loved her fiery spirit, and my heart was absolutely broken at the idea of everything that she's been through. She felt so painfully and delightfully human, and it made her struggles feel all the more real.

Then there's Leviathan. Everything about him felt larger than life, even his name. Yet he was also the ideal balance to Roma's story, providing a different sort of insight, all of which helped to show this world, and everything it had to offer (again, both the good and the bad).

There's no doubting that The Descent of the Drowned is a debut novel. You can tell in the way Ana Lal Din writes – yet you can also see how much potential is wrapped up in her words. She took something that felt so big and raw, and managed to infuse her entire novel with it.

I do want to mention that there's an extensive trigger warning list for The Descent of the Drowned. This is by no means a complete list, but inside this novel you're going to find examples of misogyny, assault and gore, sexual assault and rape, transphobia, self-harm (set in the past), and sex trafficking. All of these elements tie directly into the main plotline, and can't really be skipped over.

By that I mean, there's no way that Ana Lal Din could have written this novel and not included those parts. I could go on and on about all of the importance of what she wrote here, but honestly, I think Ana Lal Din said it best: “What I wanted was to spread awareness about the sacred prostitution, caste system, and half-creature perception and abuse of transgenders in South Asia; the ethnic cleansing of the Rohingya People; the exploitation of once-resourceful places like the Middle East and Afghanistan; the occupation of and war crimes against Palestine; and the human trafficking of adults and children across the globe.”

Descent of the Drowned (1 book)