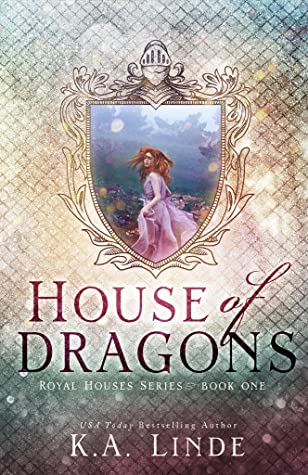 USA Today bestselling author K.A. Linde introduces the Royal Houses series with House of Dragons: the story of Kerrigan Argon, a half-Fae, half-human as she seeks her place in an unforgiving world filled with magic, mayhem, and romance. Perfect for fans of Sarah J. Maas, Holly Black, and V.E. Schwab.

Ten years ago, half-Fae, half human Kerrigan Argon was discreetly dropped off onto the steps of Draco Mountain with nothing but a note. Her life changes completely as she’s swept into the care of the House of Dragons—an elite training program for gifted Fae.

On the year of her seventeenth name day, each student will be chosen by one of the twelve tribes of Alandria to start over in society.

Everyone is chosen, except Kerrigan.

So, she strikes a bargain with the Dragon Society: convince a tribe to select her or give up her birthright forever.

With the unlikeliest of allies—Fordham Ollivier, the cursed Fae prince, who escaped his dark throne—she has to chart her own destiny to reshape the world.

I received this book for free in exchange for an honest review. This does not affect my opinion of the book or the content of my review.

I wanted to read 🎧︎📚House of Dragons for a while now. So when the opportunity came for me to listen to it on audio, I took the plunge. Narrated by Amy McFadden 🎧︎📚House of Dragons introduced the reader to a world of faes, dragons and elemental magic.

I had a great time with 🎧︎📚House of Dragons, which came as no surprise. I trust the author to deliver an engaging tale, whether its contemporary romance, paranormal romance or fantasy. She did not disappoint. The Royal House series is off to an exciting start.

🎧︎📚House of Dragons introduces Kerrigan, a half-Fae, half human. Ostracized by her father, because of her human side, he left her at Draco Mountain. Soon the House of Dragon took her under their wings. As she grew older, she learns of the prejudices and the hatred against her because of her human side. In this world, humans are inferior and its worse for half breeds. Kerrigan hopes to be selected by one of the twelve tribes. However, when she wasn’t chosen, she had to find a tribe to select her or face being stuck at The Society forever.

I found the world Linde created fascinating. We have elemental magic, dragons bonding with their riders and so much more. Although based on fantasy, the world created mirrored reality with its prejudices and racism. Linde explored hard hitting issues in this incredible story. I enjoyed getting to know Kerrigan. Such an awesome and kick ass character. She is not afraid to stand up for her beliefs and refuses to allow her fears to hinder her. The story brought Kerrigan’s loyalty, strength, courage, and determination to life.

The introduction of Prince Fordham Olivier, a dark fae from the House of Shadows, made for some interesting moments. Fordham and Kerrigan made a great team. Their relationship began on rocky ground, but throughout the story an alliance and ultimately friendship developed between them. Sparks burned between them and I kept hoping for their romance to develop. Alas, it did not materialize, because of complications on both their parts.

Besides this, Kerrigan finds herself embroiled in a mystery surrounding the death of a friend. I enjoyed the mystery, which kept me guessing as it unfolded. Throughout it all, Kerrigan discovers secrets about herself and her heritage.

The story featured several surprises, both pleasant and unpleasant.  The story ended on an interesting note. Although not a cliff hangar, it left me with several questions, leaving me eager for the next book.

Amy Mcfadden’s narration was pure perfection. This was my first time listening to her narration I would definitely listen to her again. She brought each of the characters to life and  she made it easy to distinguish between each of their voices. The narration made my journey into this world of dragons and faes doubly exciting.

This review was originally posted on Totally Addicted to Reading