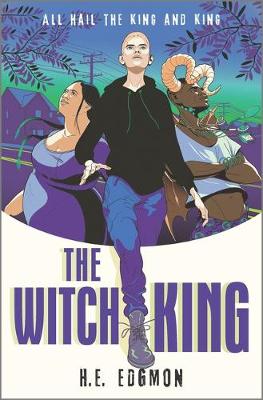 To save a fae kingdom, a trans witch must face his traumatic past and the royal fiancé he left behind. This debut YA fantasy will leave you spellbound.

Wyatt would give anything to forget where he came from—but a kingdom demands its king.

In Asalin, fae rule and witches like Wyatt Croft…don’t. Wyatt’s betrothal to his best friend, fae prince Emyr North, was supposed to change that. But when Wyatt lost control of his magic one devastating night, he fled to the human world.

Now a coldly distant Emyr has hunted him down. Despite transgender Wyatt’s newfound identity and troubling past, Emyr has no intention of dissolving their engagement. In fact, he claims they must marry now or risk losing the throne. Jaded, Wyatt strikes a deal with the enemy, hoping to escape Asalin forever. But as he gets to know Emyr, Wyatt realizes the boy he once loved may still exist. And as the witches face worsening conditions, he must decide once and for all what’s more important—his people or his freedom.

First of all, I am so incredibly impressed with H.E. Edgmon; They are certain to be a force to be reckoned with in the YA stratosphere after this amazingly fantastical YA queer fantasy DEBUT ! YES. THIS WAS A DEBUT. Can you believe it?! Because you could've fooled me!

Honestly, this book was JUSTTTTT... utter, & complete perfection. The fantasical as hell, dark fantasy, 'portal writing' style atmosphere was just SO perfectly crafted.
The LGBTQIA+ representation & how it was presented really just blew me away.
The world building blew me away.
The character development blew me away.
The PLOT blew me away.
The humor had me doubled OVER!
The romance was perfect!
Having a gay trans WITCH as the main character was just UTTER PERFECTION in and of itself. PURE Brilliance, especially because the MC, Wyatt, is one trans witch you most definitely have NOT met before. This book is so incredibly original, it is just brilliant!

In fact, EVERYTHING about The Witch King blew me away. The fact that LGBTQIA+ representation was so very present and never looked at as something 'other,' but instead, completely normal (because it IS), is exactly the type of rep I love to read, & many authors have TRIED to write a world where this seems truly natural, but few have succeeded in the way that Edgmon has! They have expertly crafted an environment where sexual & gender identity are simply that & readers of all identities will feel at home within this, again, *DEBUT* & I feel that this book is one that so many people absolutely NEED to read, for this reason (amongst just about a million others

Is it too early to announce that I've found my favorite book of the year? No? Awesome! Because The Witch King is, without a doubt, one of my favorite reads, possibly of all time. It's the fae story I never realized I needed to read.

Wyatt Croft has been on the run for years, ever since one devastating night that made him realize that Asalin, home of the fae, was not his home. You see, Wyatt is a witch, and witches typically aren't treated all too well by the fae.

To further complicate matters, Wyatt's royal fiance has been looking for him since the moment he ran away, and he has finally succeeded in his goal. Apparently, the fate of Asalin may just rest on Wyatt's shoulders, as Emyr is convinced the only way to bring peace is to give them a royal marriage.

"I'd known right then and there that something unfortunate was about to go down, but I hadn't expected him."

I basically fell in love with The Witch King within the first five pages. Everything that came after just further convinced me of my love. Wyatt's sass is amazing, the secondary characters have so much to give, and the plot was rich and fascinating.

This debut fantasy novel blew me away, both with its creativity and representation. Wyatt is a trans witch, which brings with it all sorts of complications from the fae. It also raised a lot of interesting points and things to think about, which I adored. Many of the other characters in this book were also LGBT, and it was fascinating to see how they interacted with the rest of the fae community.

Out of everything, I think I adored Wyatt's spunk and personality the most. This was a character that had gone through hell, had scars to show for it, and wasn't afraid to speak their mind. I loved it. To give you a taste of the way Wyatt thinks, read the quote below.

"Let it sink in properly that I am not the golden goose. I am more like an actual goose, hissing and honking and attacking small children who just want to give me bread."

Perfection, right? It's no wonder that I fell in love with Wyatt's story. I'm already counting down the days for a sequel at this point. I also do not doubt that I'm going to be keeping an eye open for pretty versions of this book – my heart will be crushed if they don't exist.

Before I conclude my review, I should mention several content warnings to go along with this level of humor. I do want to give H.E. Edgmon a ton of credit for providing this warning at the beginning of their book, as it's something I feel like more publishers should allow for. The warnings include abuse, transmisia, sexual assault, trauma, misgendering (both of the accidental and intentional variety), deadnaming (off-page, carefully portrayed), and panic attacks.

Thanks to Inkyard Press and #NetGalley for making this book available for review. All opinions expressed are my own.