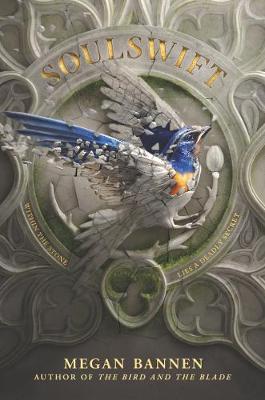 A dark, epic fantasy about a girl who must rethink everything she believes after she is betrayed and hunted by the religion that raised her—from Megan Bannen, author of The Bird and the Blade. Perfect for fans of The Winner’s Curse and The Girl of Fire and Thorns.

Gelya is a Vessel, a girl who channels the word of the One True God through song. Cloistered with the other Vessels of her faith, she believes—as all Ovinists do—that a saint imprisoned Elath the Great Demon centuries ago, saving humanity from earthly temptation.

When Gelya stumbles into a deadly cover-up by the Ovinists’ military, she reluctantly teams up with Tavik, an enemy soldier, to survive. Tavik believes that Elath is actually a mother goddess who must be set free, but while he succeeds in opening Her prison, he inadvertently turns Gelya into Elath’s unwilling human vessel.

Now the church that raised Gelya considers her a threat. In a race against the clock, she and Tavik must find a way to exorcise Elath’s presence from her body. But will this release stop the countdown to the end of the world, or will it be the cause of the earth’s destruction?

And as Tavik and Gelya grow closer, another question lingers between them: What will become of Gelya?

Soulswift was one of my most anticipated releases of 2020 and I even went into the book knowing that I was probably going to cry. And I was still not prepared. In a story that explores the dedication of one's life to religion, Gelya has prepared her whole life to become a vessel for her god and finds herself running from the very people who protected her when she finds herself harboring the essence of Elath, the mother goddess (or demon as the Ovinists call her). With only an enemy solider, Tavik, on her side, Gelya has to find a way to remove Elath's spirit from her body and hopefully avoid setting her world on the path of complete destruction.

With such a fascinating premise, Soulswift combines religious-political commentary with a classic fantasy travel story. Gelya and Tavik quickly won me over with their banter and contrasting personalities. While Gelya is more anxious and unsure, Tavik is constantly trying to find positives and lighten the atmosphere. I genuinely loved reading about their adventures and would pick up another book just to follow them around. On top of lasting characters, Megan Bannen delves into a conversation about religion's role in oppressing women and other minority groups as well as how blinding religious fervor can be of one's own downfall. This discussion is woven through Gelya's own reflection of what her religion means to her as she learns more about the different interpretations of the neighboring lands. It brings into perspective the harm of erasing other stories with the belief that there's only one right interpretation, the god is pure and the goddess is evil.

I received Soulswift in a LitJoy YA Crate at the end of 2020, and I'm grateful that I did because I wouldn't have bought it for myself otherwise. Just because it is more YA fantasy than I currently read. But to me, Megan Bannen did a great job, although I would have love more romance and a different ending, which I thought was a bit anti-climactic and disappointing after everything Gelya and Tavik went through. But I liked it and recommend it to teen and YA.