Age of War (Legends Of The First Empire, #3) 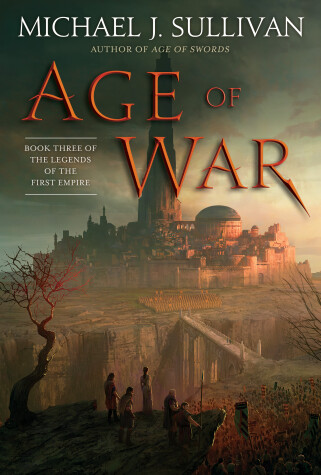 Age of War (Legends Of The First Empire, #3)

The epic battle between humankind and their godlike rulers finally ignites in the masterful follow-up to Age of Myth and Age of Swords.

The alliance of humans and renegade Fhrey is fragile—and about to be tested as never before. Persephone keeps the human clans from turning on one another through her iron will and a compassionate heart. The arrogant Fhrey are barely held in check by their leader, Nyphron, who seeks to advance his own nefarious agenda through a loveless marriage that will result in the betrayal of the person Persephone loves most: Raithe, the God Killer.

As the Fhrey overlords marshal their army and sorcerers to crush the rebellion, old loyalties will be challenged while fresh conspiracies will threaten to undo all that Persephone has accomplished. In the darkest hour, when hope is all but lost, new heroes will rise . . . but at what terrible cost?

Age of War is the third serial in The Legends of the First Empire series and you absolutely have to read these books in serial order. Each one is a journey forward on the bones of the previous story and to truly understand and appreciate all that has happened, and for what it to come, you need to have been there since the beginning. This was a truly amazing piece of fiction, I only wish that my heart could have made it through without the bruising that occurred.

This book starts on the cusp of a major war and once the war begins, wow, does it bring the battles. What an emotionally charged story! It took me some time to read this book because I had to keep setting it down after a betrayal or a sacrifice occurred. There were many shocking scenes and losses that I am still reeling over! There were also some heartwarming moments with a few characters that almost made up for the losses.

Speaking of the characters, there were a few that I really wanted to smack around - from both sides! Persephone being the one that I really, really wanted to have a good talkin’ to! I think I might even be holding a slight grudge against her, ha ha ha. I just loved reading Age of War because despite the major war angle (which I am not usually a fan of) there were some sweet moments between some unlikely couples as well as many twists and turns that have me keyed up to read the next installment in this series! This is a story and a series that I highly recommend.

Legends Of The First Empire (6 books)