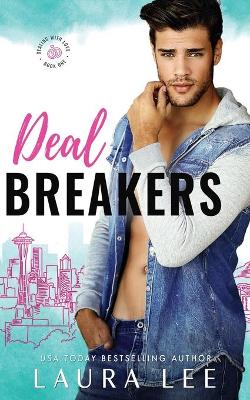 This review was originally posted on Latte Nights ReviewsI love friends to lovers romances, especially when we see how the couple interacts throughout the years. In Deal Breakers, we get a glimpse at all of their years at college, since they met until almost graduation and why their friendship suddenly...stops.

“Okay, here’s the thing. I’m a virgin. And you need to relieve me of that.”
Riley sprays beer from his mouth all over the table. “The fuck you say?”
Riley immediately has the hots for Devyn but she only wants friendship from him and that's exactly what he gives all those four years at college. Before graduation, Devyn asks Riley for one night of sex so she goes into the world without her V-card. Riley is hesitant at first the agrees. He makes her first time special and everything was going great until Devyn tells him how she feels. Riley freaks and the next morning, they barely talk to each other, cancel their plans and Riley flees from Devyn's life for 5 years until he goes in search for her again. But Devyn has already moved on and doesn't want anything to do with Riley.

Devyn is a strong woman who has gone through a lot in her life along with the death of both her parents but she's still standing strong. Riley is a man-slut but a great friend to Devyn. Their rekindling friendship 5 years later was emotional since Devyn doesn't take Riley back. She's dead set on moving on and for that, I admire her. I wish the author had gone a whole lot deeper on these characters lives during their years at college and those 5 years apart. I feel like there was a gap when the time jumps that it left me kind of lost. The author spent a great deal of pages on only the sex scene and I feel it could have been shorter so to add more important stuff in the story. I wish more character development had been in the story since, once again, their years at college were merely a glimpse and not enough to let us know enough about the characters.

Overall, this book was cute and sweet but it needed more work in the characters and the story.This review was originally posted on Latte Nights Reviews