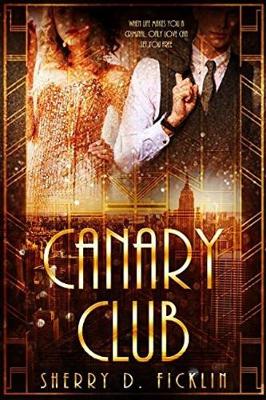 "Two worlds collide in this compelling story of star-crossed lovers in gritty prohibition-era New York. 'Bad Luck' Benny is a boy from the wrong side of the tracks. Recently released from jail, he has vowed to keep his head down and stay out of trouble. But he also needs to care for his ailing sister and the rest of his struggling family, and he'll do anything to make that happen--even if it means taking a position with a notorious crime boss. He soon finds himself in over his head--and worse still--falling for the one dame on earth he should be staying away from. Masie is the daughter of a wealthy gangster with the voice of an angel and gun smoke in her veins. Strong-willed but trapped in a life she never wanted, she dreams of flying free from the politics and manipulation of her father. A pawn in her family's fight for control of the city, and with a killer hot on her heels, she turns to the one person who just might be able to spring her from her gilded cage. But Masie is no angel, and her own dark secrets may come back to burn them both."--Back cover.

Thank you to NetGalley and the publisher for an e-arc in exchange for my honest review.


"I lived a crime free life up to this point, and I still wound up in jail, so I figure the system owes me one."

In the Canary Club, we get to follow two characters bad luck Benny and Maise the mobster's singer daughter.
Benny has just gotten out of jail to discover his little sister is sick, his brother left to care for her, while his mom is pulling doubles at the canning factory to attempt to make ends meet. This means Benny is immediately looking for a job, and after getting in touch with his old friend finds one moving crates.

Maise is the mobster's daughter who is kept under lock and key by her father for her safety and so he can control her. She's a singer in one of his clubs and she believes she will be stuck in this life forever along with her older brother.

Ben and Maise meet after Ben takes one for the team and is injured. From then on they are inseparable and he becomes invaluable to the whole family. With Ben getting more and more responsibility and Maise feeling more and more like a bird in a cage they work together to try and make this life liveable. That is until Ben's family get's threatened and he tries to juggle both the threat and keeping his new mob boss happy.

"Well, that's probably for the best. Because I don't need some nickel fortune teller to know where we're gonna end up. We're here till we die, Mas. No sense dreaming otherwise."

Overall I really did like this story, in fact, if it hadn't of been for the several historical inaccuracies this could have been an almost five start book for me. I couldn't get enough of the Canary Club and was constantly worried about Maise, Ben and Ben's family. I love reading about the 1920's right now and this book was really good. Between the tension of the mob, and the threat of other mobs and the ever-present police I was constantly intrigued. As for the romance between Maise and Ben, it was okay, things seemed a little strange with the way they interacted with each other at times, but it was still enjoyable for the most part. You could tell they really did care for each other and yes things moved quickly but it's the mob! Things always seem to move quickly when gangs are involved. I'm interested to read the prequels and to see if another book will come out in this series.

Blog Twitter Instagram Facebook
I read all three of the novellas for this series that give you back story on the characters you meet in this book so i do highly recommend you read them before you pick this one up. The author does a fantastic job of setting you in the time period of gangsters, flappers and jazzy music. You got the classic set up a mob boss family trying to get around prohibition on alcohol, a controlling father who thinks he knows what best for his singing canary daughter, and then you got the poor Benny who wants to save her and do the right thing. I felt like we got a bit of a Bonnie and Clyde feel with a bit less of bank robbing. I really got to know the characters very well and really felt like i was a part of the story and it unfolded. This was a nice change to my typical dragon and princess read. Everything i read by sherry is authentic and well thought out this is an amazing author to check out and fall in love with her writing.