by Jason Segel and Kirsten Miller 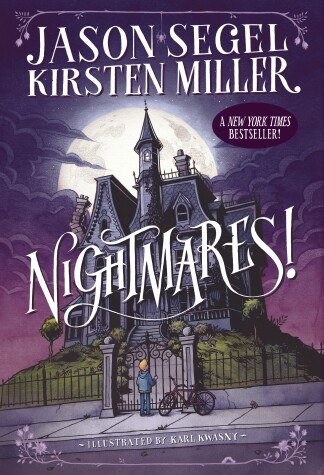 by Jason Segel and Kirsten Miller

The hilariously frightening, middle-grade novel Nightmares! is a Texas Bluebonnet nominee and the first book in a trilogy about a boy named Charlie and a group of kids who must face their fears to save their town.

Sleeping has never been so scary. And now waking up is even worse!

1. His dad married a woman he is sure moonlights as a witch.
2. He had to move into her purple mansion, which is NOT a place you want to find yourself after dark.
3.He can’t remember the last time sleeping wasn’t a nightmarish prospect. Like even a nap.

What Charlie doesn’t know is that his problems are about to get a whole lot more real. Nightmares can ruin a good night’s sleep, but when they start slipping out of your dreams and into the waking world—that’s a line that should never be crossed.

And when your worst nightmares start to come true . . . well, that’s something only Charlie can face. And he’s going to need all the help he can get, or it might just be lights-out for Charlie Laird. For good.

Book one is a New York Times bestseller and Texas Bluebonnet nominee!

"Charlie Laird, who learns fear will eat you alive if you feed it, makes an impression, and...readers will want to accompany him again."—The New York Times Book Review

"A touching comical saga...about facing things that go bump in the night."—US Weekly

"Segel...and Miller build an entertaining, cartoony world full of scary (but not too scary) monsters, silly jokes, plucky kid heroes...with a promise of adventures to come."—Booklist

"An engaging and creative story...woven with a generous amount [of] humor."—VOYA

I decided to give Nightmares! a try even though I wasn't a fan of Otherworld. I'm still not the biggest fan of Jason Segel and Kirsten Miller's writing. Several characters are flat and/or stereotypes, and the plot is predictable. But I also fully acknowledge that this one is a middle grade novel and at any rate, I thought there were fewer plot holes and better developed characters.

This is a book I can see middle graders enjoying. There's a good mixture of adventure and as soon as we reach Nightmare, there's plenty of quirky characters. Charlie has a good core group of friends that middle grade readers will enjoy.

All that said, I still think we need to caution against stereotypes - we have a nerd with glasses who is failing gym, the immediate perception that the stepmother is a witch, and an athletic friend who is failing his academic classes. These stereotypes need to change and characters need more depth. They're not offensive, but they are disappointing.

While this book wasn't for me, it wasn't the worst either. As I said, I do think the intended audience would really enjoy it. Additionally, there's a decent message woven in that it's easy to become self-absorbed and it hurts the people around you.