An Irish Christmas Feast: The Best of John B. Keane's Christmas Stories

by John B. Keane 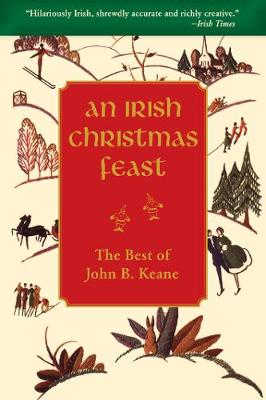 An Irish Christmas Feast: The Best of John B. Keane's Christmas Stories

by John B. Keane

‘Creates a charming emotional map of a fictitious but authentic-seeming place.’ —Boston Globe

‘John B.’s love of language was – and is – a joy to experience.’ —Brendan Kennelly

A collection of more than fifty tales by one of Ireland’s liveliest and most popular story writers. Drawing on the rich folk culture of County Kerry, John B. Keane brings new life to old customs in his portrayals of the special holiday dreams and everyday shortcomings of not-so-ordinary country people during the Christmas season. With enough good cheer to warm the heart throughout the holiday season and all the long nights of winter, Keane’s congenial volume revisits the Christmases celebrated by characters like Dotie Tupper and Johnny Naile, the deaf Canon Cornelius Coodle, the amiable spendthrift Aenias Mackson, and Hiccups O’Reilly, who disappears one Christmas Eve and is gone for seven years. Whether recounting ‘The Miracle of Ballybradawn’, ‘The Great Christmas Raid at Ballybooley’, or ‘The Order of MacMoolamawn’, whether telling the tales of ‘The Magic Stoolin’, ‘A Tasmanian Backhander’, ‘The Fourth Wise Man’ or the ‘Last Christmas Eve of the Twentieth Century’, Keane bears delightful witness to the trials and triumphs of the inhabitants of his eccentric corner of Ireland.