On This Unworthy Scaffold (Shadow Players, #3) 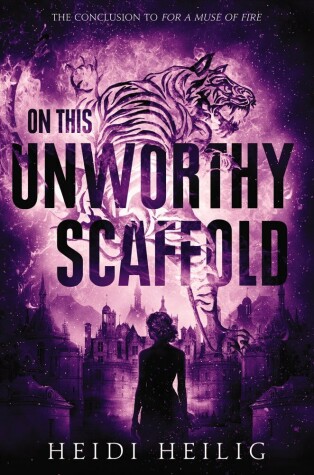 On This Unworthy Scaffold (Shadow Players, #3)

Jetta is in the center of a war. With her magical power, she could save everyone, save her country… or she could destroy it all.

Jetta’s home is spiraling into civil war. Le Trépas—the deadly necromancer—has used his blood magic to wrest control of the country, and Jetta has been without treatment for her malheur for weeks. Meanwhile, Jetta’s love interest, brother, and friend are intent on infiltrating the palace to stop the Boy King and find Le Trépas to put an end to the unleashed chaos.

The sweeping conclusion to Heidi Heilig’s ambitious trilogy takes us to new continents, introduces us to new gods, flings us into the middle of palace riots and political intrigue, and asks searching questions about power and corruption. As in the first two books, the story is partly told in ephemera, including original songs, myths, play scripts, and various forms of communication.

I received this eProof for free from Greenwillow Books via SparkPoint Studio for the purposes of providing an honest review.

Trigger/Content Warnings:This book features racism, forced institutionalisation, a trans person disguising themselves as a different gender for their safety, murder, and description of corpses.

Having loved the first two books in the Shadow Players Trilogy, I was really excited to read the final book, On This Unworthy Scaffold. Given the cliffhanger A Kingdom for a Stage ended on, I was expecting a hugely epic finalé, but sadly the the last book left a lot to be desired.

Jetta has been without the elixir that treats her malheur for quite a while, and it's effecting her. She's making rash decisions, taking risks, and putting herself in danger. It becomes clear quite quickly that Jetta's malheur needs to be treated, but the Tiger and the rebels are unable to wait. Action needs to be taken against Le Trépas, who has reanimated the bodies of Raik, the Boy King, and General Xavier Legard, using them as puppets to evict the Aquitans from Chakrana, and take control. It's decided that they will split up; Jetta will travel with Theodora to the lytheum mime to make the elixir she needs, while Cam, Akra, Leo Cheeky and Tia return to Nokor Khat to deal with Le Trépas.

I loved how the main force was divided in On This Unholy Scaffold. I was really intrigued by the different avenues the story took, and the creeping apprehension that something bad will happen while they were apart. In previous books, the scripted aspects of the ephemera usually gave us a glimpse into what the enemy was doing, a little foreshadowing of what was to come. But in On This Unworthy Scaffold, the scripted parts of the story were used to show us what was going on with Cam and Leo and the others, while Jetta and Theodora were searching for lytheum. Some major discoveries are made in this book that were amazing. Twists I wasn't expecting, paths the story took that I was really intrigued by. As I was reading, my excitement just built and built as the tension grew, and the various characters found themselves in more difficult circumstances. I loved the new characters we met, the new aspect of magic, the knowledge gained, the danger found in places not quite expected. I was so eager for the epic cliamx I knew was coming.

But it never did. And I absolutely hate to say it, because I'm such a huge fan of Heilig and her work, but I can't deny how stunned I was with how things turned out. In a number of different situations, full of danger that had me sitting on the edge of my seat, each time, the situation was resolved far too easily. It didn't take much for the tide to turn. The stakes were so high, but danger would be overcome quite quickly and simply. I can't explain further without spoiling the story, but it just felt too easy. And it's just so strange, because Heilig's The Girl From Everywhere duology ended so brilliantly. It's just such a shame. I was expecting something more, something bigger, something more climactic, but it just wasn't there.

Saying that, On This Unworthy Scaffold is a very emotional story. There was a certain moment that hit me quite hard and brought tears to my eyes. It was a twist I didn't see coming, and knocked me for six. I have loved the ephemera scattered throughout this series, it adds so much to the story. But it's really something in On This Unworthy Scaffold, and blew my mind. It was really, really beautiful.

But it sadly doesn't make up for how disappointed I was. But do read other reviews before deciding whether or not you'll read On This Unworthy Scaffold.