The Gentleman's Guide to Vice and Virtue (Montague Siblings, #1) 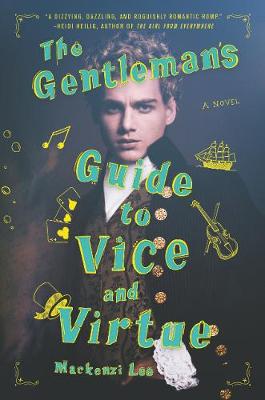 The Gentleman's Guide to Vice and Virtue (Montague Siblings, #1)

A hilarious and swashbuckling stand-alone teen historical fiction novel, named one of summer's 20 must-read books by Enternatinment Weekly! A young bisexual British lord embarks on an unforgettable Grand Tour of Europe with his best friend/secret crush. An 18th-century romantic adventure for the modern age written by This Monstrous Thing author Mackenzi Lee-Simon vs. the Homo Sapiens Agenda meets the 1700s. Henry "Monty" Montague doesn't care that his roguish passions are far from suitable for the gentleman he was born to be. But as Monty embarks on his grand tour of Europe, his quests for pleasure and vice are in danger of coming to an end. Not only does his father expect him to take over the family's estate upon his return, but Monty is also nursing an impossible crush on his best friend and traveling companion, Percy. So Monty vows to make this yearlong escapade one last hedonistic hurrah and flirt with Percy from Paris to Rome. But when one of Monty's reckless decisions turns their trip abroad into a harrowing manhunt, it calls into question everything he knows, including his relationship with the boy he adores.
Witty, dazzling, and intriguing at every turn, The Gentleman's Guide to Vice and Virtue is an irresistible romp that explores the undeniably fine lines between friendship and love.

Narrator: turns out Tolstoy did not respond in time for comment. Because HE’S DEAD.
I don't get it. Did I read a different book to everyone else? Because this kind of sucked. I hated Monty for the first 20%. And I didn't particularly like him for the last 80%. Yeah I felt sorry for him - because his dad is an ass - but frankly - so is he. He's obnoxious and rude and mean. I thought this would be a bit like Gossip Girl - Monty would be like Chuck and on some level he is - but he's also really not. I'm not even sure Monty understands half the time what the problem is, let alone cares about it. I didn't hate the adventure, but I didn't love it - the plot line just fell a little flat for me but that could've just been that I didn't like Monty. I liked Percy but he deserves better. I don't understand what he sees in Monty. I certainly wouldn't say Monty is redeemed by the end of the book - for all he makes a few weak strides towards being a better person. I did love Felicity - she was easily the best part of the book. I will definitely read the next one because of that. She was a total badass. I mean

“And with your brains and my brute strength and Felicity’s— Dear God, Felicity Montague, are you sewing yourself shut?” Felicity looks up, innocent as a schoolgirl. She’s got the bloody cravat unwrapped from her arm, sleeve pushed up, and that wicked needle buried in her own arm around the gash left by the splinter—already sewn half shut while Percy and I were distracted. “What? It needs to be done and neither of you knows how.” She dips the needle out and pulls tight so that the ripped edges of her skin meet. I slump backward against the cannon to keep from keeling over in earnest. “See if you can find Henry a couch before he’s overcome,” she says to Percy, though he’s looking nearly as horrified. After two more neat stitches, she knots off the thread and cuts it with her teeth, then gives her embroidery an examination, looking pleased as Punch. “I’ve never actually done that on a person before.” She glances up at us—Percy looking very obviously away and me swooning against the artillery. And rolls her eyes. “Men are such babies.”

Lee, Mackenzi. The Gentleman's Guide to Vice and Virtue (pp. 396-397). HarperCollins. Kindle Edition - does it get better than that?

I will say that this book handled some very heavy topics with sensitivity. Sexuality and racism were both potrayed in a meaningful way without jamming a message down your throat. But it was still not enough to redeem this book. I don't understand how it can have as many high ratings as it does. 2 stars, edging on the lower side of 2.
Overall 2.5/5. The inclusion of fantasy elements gave me a bit of story whiplash... I just couldn’t find it in myself to suspend disbelief for those certain aspects of the novel. Overall, story is thin and not my favorite, very easy to predict where the plot is heading (and as such it completely lacks any stakes). The characters/character relationships are strong (even if Monty is a bit of a stereotype and doesn’t have a strong character arc). Also, as it is historical fiction, there was no way I wasn’t going to at least enjoy it a bit.
I want the version of this book with the same characters, the same (ridiculous) plot, but without miscommunication issues nonstop. I know it’s YA, so you’re supposed to be idiots at that time in your life. I certainly was. But that’s just where I’m at with books of all stripes. I don’t want conflict that stems from assumptions and stupid misunderstandings and y’know, good old fashioned NOT TALKING. Just TALK. Don’t storm out of a room right before the one sentence that could set everything right. That happens a lot in this book, until it feels like a crutch, like the plot needed that help when it didn’t.

So just stop that. All authors everywhere. Public service announcement. Please and thank you.

Otherwise, this was fun.
4.5 stars

I loved this a lot!

It wasn't 100% the ending I wanted Monty and Percy's triumph over Monty's father - not necessarily about being queer - but on the kind of life imposed on Monty and the beatings he suffered especially with the reveal about Monty's father close to the end.

But there's a sequel so perhaps things will be handled there. If not, then I will pine over this for the rest of my life and create alternate endings to satisfy my aching heart.
You know that feeling when you read a book or watch a movie and feel like you’re found a kindred spirit in the creator? That’s how I feel about Mackenzi Lee and The Gentleman’s Guide to Vice and Virtue. There are so many bits and pieces that I really loved about this book… both its content and the writing itself.

Okay so first of all, let’s talk about the language Mackenzi Lee used. It’s perfect. Both the dialogue and the narrative flow expertly. The Gentleman’s Guide to Vice and Virtue is completely immersive. Mackenzi Lee has gone the extra mile to use language that would have been fashionable at the time. There was a moment when Monty says he didn’t want to use a jacket as a flag because they’re all so “macaroni” and I chuckled – I don’t know if the language is something that most people would notice, but I did! And I thoroughly appreciated it.

She also went the extra mile in character creation. The conversation flows like real conversation, not book conversation. Limited use of first names, and the way that Monty says “Hello, darling” like a real life catch phrase? I absolutely love it. There is a lot of rep in this book – epilepsy, LGBTQ+, racism, domestic abuse – and none of it felt like it was there just to make a statement. This… this is how I want to see rep in books. The rep is not the plot – we simply have diverse characters and that’s awesome. I think it’s important to have books that blatantly point out the wrongness of some things, and that humans come in all types. But also, we need rep in books where it’s just different people doing things together without making a big statement. As Percy says, he thinks he can be perfectly happy living just as he is. So sometimes, it’s nice to see characters just… live.
Star Rating: —> 5 Stars ⭐️⭐️⭐️⭐️⭐️
(and by 5, I obviously mean all of the damn stars in the sky - this rating system is so restricting. I refuse to conform! Anarchy!
I loved the narration for this one! So much fun!
I shouldn't like Monty, but damn if he didn't grow on me. Everyone has their history. I shouldn't have been so quick to judge (this fictional character 😏) ❤
This book had me at LGBTQIA+ and boarding school, mixed with a ton of shennanigans. So, yes, please! I absolutely love this and you can expect a full review soon.