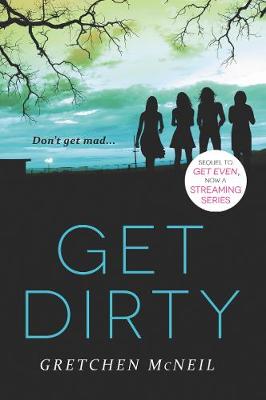 The Breakfast Club meets Pretty Little Liars in Gretchen McNeil's sharp and thrilling sequel to Get Even. Perfect for fans of E. Lockhart, Karen M. McManus, and Maureen Johnson.

The members of Don't Get Mad aren't just mad anymore . . . they're afraid. And with Margot in a coma and Bree under house arrest, it's up to Olivia and Kitty to try to catch their deadly tormentor.

But just as the girls are about to go on the offensive, Ed the Head reveals a shocking secret that turns all their theories upside down. The killer could be anyone, and this time he—or she—is out for more than just revenge.

The girls desperately try to discover the killer's identity as their own lives are falling apart: Donté is pulling away from Kitty and seems to be hiding a secret of his own, Bree is sequestered under the watchful eye of her mom’s bodyguard, and Olivia's mother is on an emotional downward spiral.

The killer is closing in, the threats are becoming more personal, and when the police refuse to listen, the girls have no choice but to confront their anonymous “friend” . . . or die trying.

I feel like Get Dirty had middle book syndrome even though it wasn’t the middle book. I don’t know what happened. I loved Get Even, and I have been so freakin’ excited to read more about the gang and to find out who the killer is. Somehow, Get Dirty was completely lacklustre, and I can’t even figure out why.

The stakes are definitely higher in Get Dirty, but somehow the whole book seemed very casual. It was like I was watching everything happen from behind frosted glass. I was totally disconnected from the story, and yet still invested in the plot. Does that make any sense?

I do wonder if my experience would have been different had I binge-read the duology and started Get Dirty right after finishing the first book. I think that the year between books completely killed the buzz that I had for this series, and I didn’t realise until I was already near the end.

I also didn’t like how many characters were introduced or expanded upon in this book. The cast felt too big, and it made the whole DGM situation even more unrealistic because all of a sudden there were a dozen members and more were joining every time I turned the page.

So yeah. I’m more than a little disappointed by Get Dirty after being thoroughly invested in the previous book. It’s a shame, but I’ll definitely be reading McNeil’s future books because I think she’s a talented writer. This book in particular just fell a bit short.
Loved it! Fantastic end. Totally didn't see that coming....review to come
****PLEASE BE AWARE THIS IS THE SEQUEL TO GET EVEN, THEREFORE THERE MAY BE SPOILERS AHEAD****

When I read Get Even back in July, the ending left me furious! I knew it would, because I knew there was a sequel coming, but I read it anyway and prepared myself for the wait for Get Dirty, which thankfully wasn’t as long as I expected as a copy popped up on Edelweiss in February. I had a few really exciting books I could have picked to read first, but I knew I needed to find out who was the one trying to get revenge on the DGM girls and Get Dirty didn’t disappoint.

The most frustrating thing for me starting Get Dirty was the simple fact I’d forgotten what had gone on in Get Even. Sure, some of the parts came back to me as I started reading, but publishers really need to think about adding a recap to the beginning of sequels just as a refresher (it’s part of the reason I generally don’t read book series until the series has ended because it’s so annoying to forget bits). It stunted my reading because I wasn’t as hopped up as I should have been to get started and it took a while to orient my head around everything and remember bits and pieces again. I soon got in to the swing of things again, and could hardly believe just how insane it all was!

If I thought Get Even was a fast-paced, furious book, with so much happening, it was the same for Get Dirty. Left and right, things were happening and it was so freaking hard to keep up and so hard for the girl’s to keep up! Margot’s out of action, Bree’s out of action so it was up to Kitty and Olivia to really dig deep in to everything they could to try and figure out who was setting them up. In fact, I was literally stunned at who it was. I’d had my money on someone else (which actually made me sad because I loved who I suspected!) and when it was actually revealed who it was it blew my mind. Sometimes you expect things like that, but I didn’t. Because the girls are so fractured this time round, it felt less like a team effort which was the biggest shame, but on the other hand, that’s how the perpetrator had made it to be.

I probably would have loved Get Dirty more if I’d started it as soon as I’d finished Get Even, because it would all have been fresh in my mind, but I soon got in to it, and the end was so fast and furious I nearly got whiplash. I was literally reading the pages as quickly as my eyes could manage, it was CRAZY. I am now a big fan of Gretchen McNeil. She really knows how to write her novels, and the amount of blood shed would have made even the most hardened crime writer wince! It was so good to get all the answers that were missing (rightly so) from Get Even and I will anxiously be awaiting what Gretchen writes next because I was captivated for two books with the awesome DGM antics and it just goes to show that things always come back to haunt you, sometimes in the worst possible way.