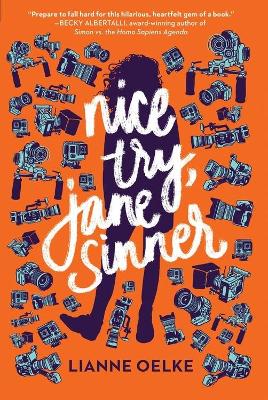 Jane tackles her housing problem by signing up for House of Orange, a student-run reality show that is basically Big Brother, but for Elbow River Students. Living away from home, the chance to win a car (used, but whatever), and a campus full of people who don't know what she did in high school... what more could she want? Okay, maybe a family that understands why she’d rather turn to Freud than Jesus to make sense of her life, but she'll settle for fifteen minutes in the proverbial spotlight.

As House of Orange grows from a low-budget web series to a local TV show with fans and shoddy T-shirts, Jane finally has the chance to let her cynical, competitive nature thrive. She'll use her growing fan base, and whatever Intro to Psychology can teach her, to prove to the world - or at least viewers of substandard TV - that she has what it takes to win.

I decided pretty much in the heat-of-the-moment that I wanted to reread Nice Try, Jane Sinner for the Reading Rush this year, and I'm glad I did.  It's been a little bit since I picked up a mood read in hardcopy.  I believe I liked it better this time, because I knew Jane better and what to expect from her.  Still an entertaining book on a second read, because the characters are compelling.

And the characters, have to be compelling, and for two reasons.  First of all, the college-level reality TV show House of Orange is the central plot of the book, and if a reality TV show, you need interesting people.  Second, Jane expresses interest in psychology and we spend some time with her very own internal therapist.  There's a lot of levels of personality in observation here, as well as discussions about mental health.  I think the depth of character was really successful and interesting, more so the second time through.

Finally, I'm sort of amazed and very appreciative of how successful the storytelling format is here.  Nice Try, Jane Sinner is told in a journal format, yet still manages to keep consistent pacing, great humor, and successful visual world building.  All in all, my second read has pushed this one up from a four star review, to a five.

Nice Try, Jane Sinner is one of those books with a lot of snark. For me, this means that the personality of the main characters seemed to falter and become flat for a while, but it's still amusing enough that I think that Jane will appeal to a wide range of audiences.

Her life feels meaningless after the Incident, so Jane half-heartedly tries to pick up the pieces and get away from everything that makes her feel small and pointless. It's easier said than done, especially when family, friends, and society are trying to "help" you, but it feels like they're just digging your hole a bit deeper. Jane's escape is into the reality TV show, House of Orange.

Lianne Oelka is smart here. The House of Orange gets you involved in Jane's life, but also in the show itself. The slimy characters you want voted out pull you along in the story probably more than "will Jane or won't Jane pass sociology". I'm not a reality show person, but it's really easy to let those things suck you in.

I liked this book well enough, but honestly didn't love it. I thought it was well-written and I appreciated the conversation about personal beliefs and overcoming prejudice, but I wasn't all that invested in Jane herself. I think that this book is definitely worth a read, though, and I'd read Oelke's next book.
I actually pushed this one up my TBR, because I kept seeing reviewers EVERYWHERE talking about how uproariously funny this book was. You know what? It was as funny as everyone said it was.

•Pro: Jane was hilarious. She was wry, witty, and fluent in sarcasm. She was a keen observer, who didn't sugarcoat, and her observations were fabulous. Loved her!! Note: for those of you who get my reference, she totally reminded me of Daria, who I also loved.

•Pro: Siblings!! I adored Jane and her younger sister, Carol. You could see the mutual admiration they had for each other, and it was a very lovely sisterly bond they shared. Carol was much more open about her feelings, but Jane gave a little here and there, and she eventually did something major, because she cared so much for Carol.

•Pro: There were so many issues explored and I really enjoyed being there with Jane as she worked her way through. Jane tackled mental health issues, a crisis of faith, strained familial relationships, a failed romance, and issues with her friends. She was also trying to get her life back on track after her "personal crisis and her subsequent expulsion". There were many times I worried if she would give up, but she was determined to make this new opportunity work and to prove to herself and everyone else, that she cold do it.

•Pro: The reality show, House of Orange, was fantastic. From the dynamic in the house to Jane's phycological experiments on the other players. I have watched quite a few reality competition shows in my lifetime, and this one was a great amalgam of many of my faves. It had all those signature elements I love and was terribly fun.

•Pro: Maybe we didn't get to know the auxiliary characters that well, but I adored each and every one of their quirks. They all had something quite unique about them, which delighted me and added to the fun.

•Pro: I laughed every time Jane intentionally butchered an idiom just to get a rise from her father. It was harmless, but he took the bait every time.

•Pro: I am a fan of alternate formats and really liked that this story was told through Jane's journal entries. Jane's narrative is interspersed snippets of conversations and, it worked really well for me. I especially liked how Oelke let the drama unfold, only letting us know bits and pieces of why Jane was expelled. When I finally got the whole story, my heart pretty much cracked in half for her.

•Pro: This is Jane's climb back from the depths of despair and failure, and I love that the ending is so positive.

(Jane totally reminds me of Daria)

Overall: I so enjoyed accompanying Jane on her rocky road to recovery. It was filled with humor as well as thoughtful reflection. A solid debut, which has me looking forward to reading more of Oelke's work.

*ARC received in exchange for an honest review.