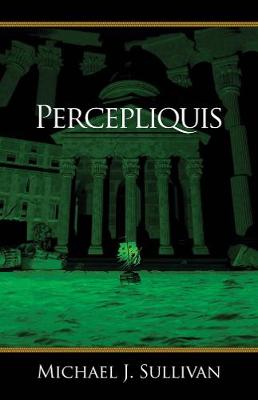 IMPORTANT NOTE!
This edition of Percepliquis is being released for readers of the original Ridan editions of The Crown Conspiracy. It does not include book 5, Wintertide. If you're reading the omnibus editions from Orbit, you should purchase Heir of Novron (which includes both Wintertide and Percepliquis).

IT ALL COMES DOWN TO THIS...THE ELVES HAVE CROSSED THE NIDWALDEN. TWO THIEVES WILL DECIDE THE FUTURE.

"I saw a great journey. Ten upon the road, she who wears the light will lead the way. The road goes deep into the earth, and into despair. The voices of the dead guide your steps. You walk back in time. The three-thousand-year battle begins again. Cold grips the world, death comes to all, and a choice is before you." -- Fan Irlanu, Tenkin Seerer of Oudorro Village

Percepliquis is the final installment of the epic fantasy, The Riyria Revelations. In this saga that began with The Crown Conspiracy, two thieves caught in the wrong place at the right time were launched on a series of ever escalating adventures that have all lead to this moment. Three thousand years have passed and the time for Novron's heir to act has arrived.

"The Crown Conspiracy is a well-written and enjoyable novel. I was invested in the characters and their travails. Royce and Hadrian s friendship was particularly fun to read" -- Tammy Moore, sfSite

"Every time I finish a book in this series it makes me want the next one instantly. -- Cindy Hannikman, Fantasy Book Critic