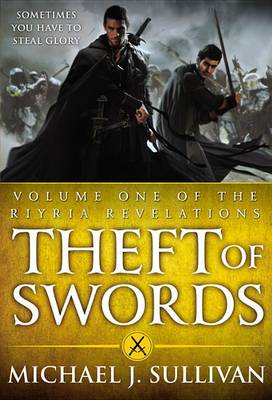 Royce Melborn, a skilled thief, and his mercenary partner, Hadrian Blackwater, make a profitable living carrying out dangerous assignments for conspiring nobles-until they are hired to pilfer a famed sword. What appears to be just a simple job finds them framed for the murder of the king and trapped in a conspiracy that uncovers a plot far greater than the mere overthrow of a tiny kingdom.

Can a self-serving thief and an idealistic swordsman survive long enough to unravel the first part of an ancient mystery that has toppled kings and destroyed empires?

And so begins the first tale of treachery and adventure, sword fighting and magic, myth and legend.

When author Michael J. Sullivan self-published the first books of his Riyria Revelations, they rapidly became ebook bestsellers. Now, Orbit is pleased to present the complete series for the first time in bookstores everywhere.

5 stars for the first book, 4 for the second.

I liked this book,it was entertaining to read.The two main characters are best of friends but they were thieves.And this probably did add to the joy I had reading it.They would take any job for pay.

I've read several books about heroes,but these guys were straight up thieves.But who knows by the end of the series they may be heroes.
I am such a huge fan of the Riyria series because I love the partnership of Hadrian and Royce! Their banter both snarky and serious is always entertaining. I have read this book twice and still love it just as much as the first time. What a great series!!
I really, really enjoyed this story of a pair of thieves who take on a job that lands them in hot water. They're set up as being the murderers of a king in a kingdom and they have to work out a way of getting away from the death penalty. Meanwhile they get caught up in a more complicated plot for the future of the area.
I loved the two main characters, Royce Melborn and Hadrian Blackwater, they're so much fun to read about, they banter and behave like two people who have been working together for so long that they can almost predict what the other will do. I really want to read more about these characters. There were moments when I had to re-read to find who was where and doing what but overall things flowed well and I was very much sucked into the story, ploughing through it quite quickly.

I would recommend it.
Just finished the first installment to the series and I highly enjoyed it! There's adventure, mystery and politicking, all of which are accessible and entertaining to read. I especially enjoyed the dyanmic between the main characters Royce Melborn and Hadrian Blackwater. Looking forward to reading the other two installments to the series! You could read my full review of the book on my blog: http://www.rulethewaves.net/blog/?p=3699