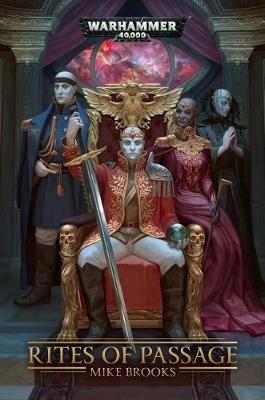 The death of Lord Azariel, head of the Navigator House Brobantis, draws his widow into a dark world of ritual killings and cult murders, while larger plans are at work and entire worlds are threatened…

READ IT BECAUSE
Delve into the murky politics of the Navigator houses with a novel packed full of murder, conspiracy and warp-borne threats.

THE STORY
Lord Azariel, Head of the Navigator House Brobantis is dead. His widow and murderer, the Lady Chettamandey, stands to inherit his power and influence. Her plans for ascension are curtailed when she’s drawn into a dark world of ritual killings and cult murders, with planets being dragged into the warp seemingly at a whim, the threat to Chettamandey’s legacy is dire, and only she can avert potential disaster.

I received a copy of Rites of Passage through NetGalley in exchange for a fair and honest review.

Rites of Passage is the first novel in the Lady Chettamandey series by Mike Brooks. It also fits into the world of Warhammer 40,000, which should give you an idea of how much material its going to have to work with.

Lady Chettamandey is recently widowed. She's also a Navigator, and an exceptionally talented one at that. Her talent doesn't stop there, as she's also a quick mind and mind – meaning that she's got loads of plans for the Navigator House Brobantis. Namely, she wants to take charge.

But that was all before the disaster. Now she'll be content simply to save her people. And her planet. For there is a dark plan happening, one that involves using the warp as a weapon. Her unique skillset has put her at the forefront of this latest battle.

“It seems we're in agreement, then. I also don't wish to die a horrible, painful death, Tekoa, and I need your help to ensure that both of us, along with anyone we've ever loved, can avoid that.”

Rites of Passage was a highly entertaining novel, and an absolute delight to read. Mike Brooks has successfully merged the world of Warhammer 40,000 with other storytelling techniques in order to create a compelling tale.

Honestly, there's a lot to love about this novel. To start with, let's talk about Lady Chettamandey. She's, simply put, amazing. I love that she's older and mostly incapable of physical fighting (due to the condition of her body) and yet she still kicks major butt. Just not in the way you'd expect. It made for a unique leading character, as did her grit and sass
.
The core of the plot was also fascinating. The Navigators do not have the best job when you consider the risks. And yet they are vital. It's not something I thought too much about if I'm being honest. This whole story opened my eyes to that world.

There's so much more to it than I expected. There's politics, backstabbing, rituals, and more. Rites of Passage contained a little bit of everything, proving that this group of families is just as complex as any other part of this franchise.

The main threat was epic in scale, which I'll admit I was a bit surprised about. Yet at the same time, it felt wholly organic. It felt like the sort of risk that would involve the characters we're reading about. More than that, it explained all of the scheming, as well as the alliances.

I also highly enjoyed the secondary characters, as well as the subplots they brought with them. They added a sense of richness to the world, making it fell all the more fleshed out.

I'm noticing a lot of less than stellar reviews about this book online (well, on Goodreads, I didn't check the other platforms). I'll confess some surprise about that, as I thoroughly enjoyed the read. As for the 'clunky pronoun' problem? I didn't even notice it until I saw the complaints, so clearly it didn't bother me. It seemed rather seamless, actually.

I'm really glad that I took the time to read Rites of Passage, as I loved the different perspective. This is marked as being the first in a series, so here's hoping there will be more in the future! In the meantime, it looks like there are two short stories I can check out.