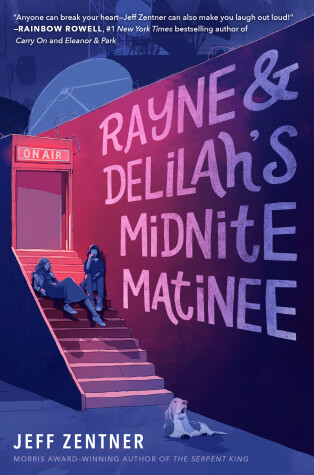 "Anyone can break your heart--Jeff Zentner can also make you laugh out loud!" --RAINBOW ROWELL, #1 New York Times bestselling author of Carry On and Eleanor & Park

From the Morris Award-winning author of The Serpent King comes a contemporary novel about two best friends who must make tough decisions about their futures--and the TV show they host--in their senior year of high school.

But with the end of senior year quickly approaching, the girls face tough decisions about their futures. Josie has been dreading graduation, as she tries to decide whether to leave for a big university and chase her dream career in mainstream TV. And Lawson, one of the show's guest performers, a talented MMA fighter with weaknesses for pancakes, fantasy novels, and Josie, is making her tough decision even harder.

Scary movies are the last connection Delia has to her dad, who abandoned the family years ago. If Midnite Matinee becomes a hit, maybe he'll see it and want to be a part of her life again. And maybe Josie will stay with the show instead of leaving her behind, too.

As the tug-of-war between growing up and growing apart tests the bonds of their friendship, Josie and Delia start to realize that an uncertain future can be both monstrous...and momentous.

"I laughed, cried, and fell over-the-moon in love with Rayne & Delilah's Midnite Matinee." --JENNIFER NIVEN, New York Times bestselling author of All the Bright Places and Holding Up the Universe

"A testament to the power of friendship and big dreams, Rayne & Delilah's Midnite Matinee had me laughing aloud on one page and sobbing on the next. A resounding triumph." --NIC STONE, New York Times bestselling author of Dear Martin

"Rayne & Delilah's Midnite Matinee starts as comedy about the wildly imperfect, and ends as poetry about the ever-hoping heart. I don't know how you write that book. Fortunately, Jeff Zentner does." --JESSE ANDREWS, New York Times bestselling author of Me and Earl and the Dying Girl

I received a free copy of this book from LibraryThing Early Reviewers in return for an honest review.

This book took me a little while to warm to, but I'm glad I persevered with it. It's a story about two teenage friends, Josie and Delia, who are about to graduate high school. They host a weekly show, featuring low budget old horror and sci-fi movies, on public access TV in Tennessee. The story is told alternatively in each other's voice, which I didn't particularly enjoy at first. After the first 50pages or so, though, I began to appreciate the way the story was told, as it gave the perspective of each of the character, with insight into how they were feeling with the inevitable changes that would happen as they leave high school and continue their lives beyond that. Cracks start appearing in their relationship as they both try to figure out what is next. You'll have to read it to find out.

This is the second book by Zentner that I have read. I like his style and his characters are real. There were lots of funny laugh-out-loud moments in this book, but there were also other moments that were quite moving. Ultimately, it's a story of friendship, but it is so much more. I'm glad I was given the opportunity to read it.
This review was originally posted on Once Upon a Chapter

I read Rayne & Delilah's Midnite Matinee by Jeff Zentner because Zentner is an auto-read author for me. I read The Serpent King because it had come in my first ever Owlcrate box. After that I was hooked. Goodbye Days sealed the deal.

Rayne & Delilah's Midnite Matinee is the first novel that I didn't full on ugly cry for but it was still a great book! It was just different than I had expected it to be.

It wasn't until the end that I got a bit choked up because I could relate so much to Delia. I didn't go to college with the rest of my friends. Long story and was not my choice. I know what it's like to feel left behind even when no one is really at fault. It makes you feel small because you don't have great plans for your life. It makes you feel childish because only babies get upset about being left out.

Graduation is; however, the first real time in your life when you make major life choices. This really resonated throughout Midnite Matinee. I really think Zentner did a great job exploring what it means to be out of high school and all the little things that get lost in the big moment. He really capitalizes on the day to day things that change that get swallowed by the actual act of graduation and freshman year at college.

Rayne & Delilah's Midnite Matinee wouldn't be the first Zentner novel I'd recommend but it's still pretty solid.
THIS book is yet another example of why I will continue to read every book Jeff Zentner writes. He made me laugh, he made me cry, he made me care, and he did so well.

Many upper YA books take on those BIG life changes that teens that age face. The end of high school brings many new beginnings, but some beginnings are accompanied by endings. Delia and Josie may have been best friends, but they now found themselves on divergent paths.

For Josie it meant leaving home and leaving Delia. She would have to adjust to a new city, a new school, new friends, a new job, and a life with a lot less Delia. She was dealing with all the anxiety that accompanies leaving the nest, but she was also weighed down with a lot of guilt when it came to Delia.

Delia had been dealing with feelings of abandonment for over a decade since her father left and never looked back. He left, her other best friend left, and now Josie was going to leave too. My heart totally went out to Delia. It's never fun being the one left behind, and when your own father can up and sever all ties with you, what would keep someone, who is only a friend from doing the same? She just broke my heart, and I wanted to give her the most fierce hugs a person could give, over and over again.

BUT, not to worry, because let me tell you, most of this book is chockfull of hilarity. Delia and Josie were such a fantastic pair. I adored the way they played off each other and their Seinfeldesque discussions about nothing were a thing of beauty.

He also gave us a most wonderful love interest with Lawson. Gosh! He immediately captured my heart, and my love for him just grew and grew with everyone of his on page appearances. He had all those soft boy qualities I love, as well as being an MMA fighter and an avid SFF reader. He was sweet and lovely and he wore his heart on his sleeve. Oh, and, the romance was precious and perfect.

I will admit, Orlando was a mixed bag for me. The stuff with Devine took a real over the top turn, but the chapters that followed were so beautiful and emotional, that I just didn't really care what happened before that. Zentner did some wonderful things for these characters in those last few characters. I found myself simultaneously shedding happy and sad tears as I sported a HUGE grin.

Other things I loved:

Overall: This was a beautiful story about friendship, love, moving on, and letting go. It was about beginnings and endings and appreciating the lessons learned along the way.

I am notoriously picky about books of a lighter nature. But since The Serpent King is one of my all-time favorites, and I really loved Goodbye Days, I was obviously going to give Rayne & Delilah a go. And I am so glad that I did, for it was fabulous. This book is completely laugh-out-loud funny. Nay, it's laugh-at-inappropriate-times funny.

But beyond just being phenomenally funny, it had so, so much heart. Delia and Josie are both incredible characters who I loved from basically the start. I related far more to Delia, but I still really enjoyed Josie. They're both facing a lot of changes as they finish their high school years, and effectively, their childhoods. They are of course also going through major personal changes, as a result of all of the upheaval but also just as a result of growing up.

Their friendship is at the center of the story, and it's so well done. It feels incredibly authentic, and I swear I have had some of these same ups and downs with my own friends (you know, minus the horror movie cable access show, sadly). But it isn't just their relationship that has a focus, there are so many other highlighted relationships! All the side characters are incredibly well fleshed out, and I grew to care about them just as much as Delia and Josie. And, family was a huge focus too.

Add to it a road trip to a fan convention, and you have me drowning in flails. You'll laugh (a lot), cry, and just feel like your heart is fuller after reading Josie and Delia's story.

Bottom Line: Full of hilarious hijinks, heartbreaking, life-defining moments, and a friendship that frankly cannot be beat. To say you want to read this is a severe understatement.