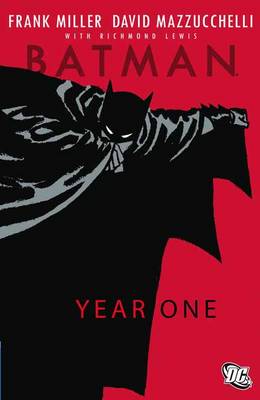 One of the most important and critically acclaimed Batman adventures ever - written by Frank Miller (BATMAN: THE DARK KNIGHT RETURNS) with art by David Mazzucchelli (Daredevil) - returns in a new edition of the deluxe hardcover designed by Chip Kidd. In addition to telling the entire dramatic story of Batman's first year fighting crime from BATMAN #404-407, this collection includes new introductions by Miller and Mazzucchelli, loads of reproductions of original pencils, promotional art, unseen Mazzucchelli Batman art, Richmond Lewis's color samples, script pages and other surprises.

We get to see Bruce return and become The Batman, while along side we see Lieutenant Gordon make his debut in Gotham also.
Brilliant. The bad-ass Batman begins. My all-time favorite vigilante and comic book superstar.
I really enjoyed the historical introduction to the book and of course the story it's self.
Love Frank Miller and David Mazzucchelli's work.