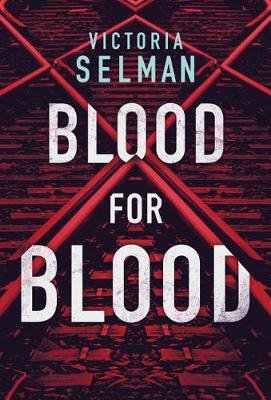 “For fans of a stylish fast paced thriller, Blood for Blood delivers on the nail” —Kate Hamer, bestselling author of The Girl in the Red Coat

Ziba Mackenzie profiles killers. Now one is profiling her.

Rush hour, London. A packed commuter train is torn apart in a collision. Picking through the carnage, ex-special forces profiler Ziba MacKenzie helps a dying woman who passes on a cryptic message: He did it. You have to tell someone.

When a corpse is found bearing the gruesome signature of a serial killer dormant for twenty-five years, Ziba is pulled into the hunt for the perpetrator. As the body count rises it becomes clear he’s on a new spree. But what’s brought the London Lacerator back after such a long hiatus? And does his sudden return have anything to do with the woman on the train?

Ziba scrambles to profile the killer in the hope of predicting his next move. But time is running out. And the closer she gets to uncovering his identity, the closer he gets to destroying hers.

I had picked up Blood for Blood because I was actually interested in reading the third book in this series, Snakes and Ladders, but since I had time, I thought I would start with book one. I don’t know if that was a mistake or not. After reading this book, I am not sure if I even want to continue in this series.

Blood for Blood was not a terrible read but it was certainly not compelling. Ziba was an interesting character and I was sorry for the loss of her husband but more of this story focused on her loss than I would have expected for a thriller. Then there was Ziba’s ridiculous expressions for every person she crossed. She was very crass and unnecessarily so. I just wasn’t a fan of the dialogue.

The story alternated between Ziba’s accounts of the present and the killer’s past recollections and I did like that. I always liked to get the view points from the main players in a story and I liked that the recollections were short in nature because that made it easier to deal with. I am not a fan of the subject matter that drove the killer to do the deeds that were being acted out.

There were also a few tropes taking place in Blood for Blood that were so obvious and not very exciting. Meh. The story didn’t start off very strong for me but I will admit that there was a point where it did take off and I couldn’t put it down. I liked that and that is the main reason why I might consider possibly continuing in this series.