Published 7 June 2007
Geralt is a witcher, a man whose magic powers, enhanced by long training and a mysterious elixir, have made him a brilliant fighter and a merciless assassin. Yet he is no ordinary murderer: his targets are the multifarious monsters and vile fiends that ravage the land and attack the innocent. He roams the country seeking assignments, but gradually comes to realise that while some of his quarry are unremittingly vile, vicious grotesques, others are the victims of sin, evil or simple naivety. One reviewer said: 'This book is a sheer delight. It is beautifully written, full of vitality and endlessly inventive: its format, with half a dozen episodes and intervening rest periods for both the hero and the reader, allows for a huge range of characters, scenarios and action. It's thought-provoking without being in the least dogmatic, witty without descending to farce and packed with swordfights without being derivative. The dialogue sparkles; characters morph almost imperceptibly from semi-cliche to completely original; nothing is as it first seems.Sapkowski succeeds in seamlessly welding familiar ideas, unique settings and delicious twists of originality: his Beauty wants to rip the throat out of a sensitive Beast; his Snow White seeks vengeance on all and sundry, his elves are embittered and vindictive.
It's easily one of the best things I've read in ages.' 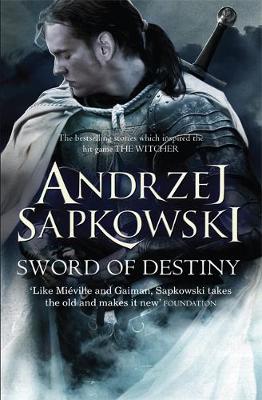 Published 19 May 2015
Geralt is a witcher, a man whose magic powers, enhanced by long training and a mysterious elixir, have made him a brilliant fighter and a merciless assassin. Yet he is no ordinary murderer: his targets are the multifarious monsters and vile fiends that ravage the land and attack the innocent. He roams the country seeking assignments, but gradually comes to realise that while some of his quarry are unremittingly vile, vicious grotesques, others are the victims of sin, evil or simple naivety. In this collection of short stories, following the adventures of the hit collection THE LAST WISH, join Geralt as he battles monsters, demons and prejudices alike... 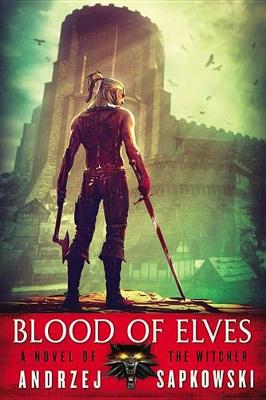 Published 16 October 2008
The Witcher, Geralt of Rivia, becomes the guardian of Ciri, surviving heiress of a bloody revolution and prophesied savior of the world, in the first novel of the New York Times bestselling series that inspired the Netflix show and the hit video games.

For over a century, humans, dwarves, gnomes, and elves have lived together in relative peace. But times have changed, the uneasy peace is over, and now the races are fighting once again. The only good elf, it seems, is a dead elf.

Geralt of Rivia, the cunning assassin known as the Witcher, has been waiting for the birth of a prophesied child. This child has the power to change the world -- for good, or for evil.

As the threat of war hangs over the land and the child is hunted for her extraordinary powers, it will become Geralt's responsibility to protect them all. And the Witcher never accepts defeat.

Now, look out for The Tower of Fools, book one of Andrzej Sapkowski's Hussite Trilogy, coming in October 2020! 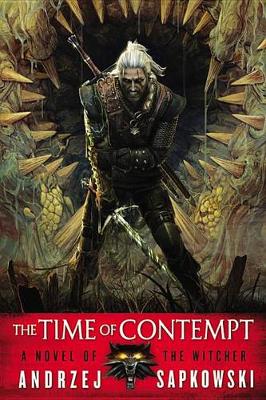 The Time of Contempt

Published 1 January 2013
Geralt the Witcher has fought monsters and demons across the land, but even he may not be prepared for what is happening to his world. The kings and armies are maneuvering for position, each fearing invasion from across the river, each fearing their neighbours more. Intrigue, dissent and rebellion are on all sides. The Elves and other non-humans are still suffering under decades of repression, and growing numbers join the commando units hidden deep in the forest, striking at will and then dissolving into the trees. The Magicians are fighting amongst themselves, some in the pay of the kings, some sympathetic to the elves. And against this backdrop of fear and contempt Geralt and his lover Yennefer must protect Ciri, orphaned heir and sought by all sides. For the prophecy rests on her, and whether she lives or dies she has the power to save the world - or perhaps end it. Published 1 January 2014
The Wizards Guild has been shattered by a coup and, in the uproar, Geralt was seriously injured. The Witcher is supposed to be a guardian of the innocent, a protector of those in need, a defender against powerful and dangerous monsters that prey on men in dark times. But now that dark times have fallen upon the world, Geralt is helpless until he has recovered from his injuries. While war rages across all of the lands, the future of magic is under threat and those sorcerers who survive are determined to protect it. It's an impossible situation in which to find one girl--Ciri, the heiress to the throne of Cintra, has vanished--until a rumor places her in the Niflgaard court, preparing to marry the Emperor. Injured or not, Geralt has a rescue mission on his hands. 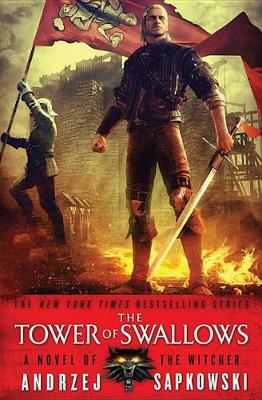 The Tower of Swallows

Published 17 May 2016
The world is at war and the prophesied savior is nowhere to be found. The Witcher, Geralt of Rivia, races to find her -- but time is short, and an army is on his heels in the fourth book of the New York Times bestselling series that inspired the Netflix show and the hit video games.

The world has fallen into war. Ciri, the child of prophecy, has vanished. Hunted by friends and foes alike, she has taken on the guise of a petty bandit and lives free for the first time in her life.

But the net around her is closing. Geralt, the Witcher, has assembled a group of allies including Dandelion, Milva, Regis, and Cahir, to rescue her. Both sides of the war have sent brutal mercenaries to hunt her down. Her crimes have made her famous.

There is only one place left to run. The tower of the swallow is waiting. . . 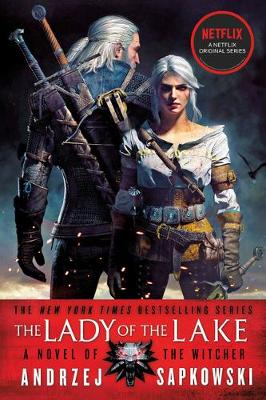 The Lady of the Lake

After walking through a portal in the Tower of the Swallow, thus narrowly escaping death, the Witcher girl, Ciri, finds herself in a completely different world... a world of the Elves. She is trapped with no way out. Time does not seem to exist and there are no obvious borders or portals to cross back into her home world.

But this is Ciri, the child of prophecy, and she will not be defeated. She knows she must escape to finally rejoin the Witcher, Geralt, and his companions - and also to try to conquer her worst nightmare. Leo Bonhart, the man who chased, wounded and tortured Ciri, is still on her trail. And the world is still at war. 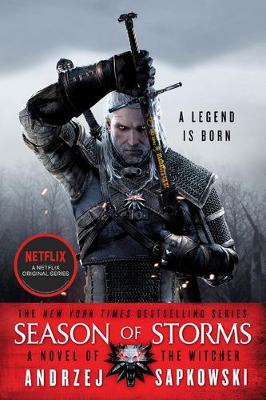 Geralt. The witcher whose mission is to protect ordinary people from the monsters created with magic. A mutant who has the task of killing unnatural beings. He uses a magical sign, potions and the pride of every witcher - two swords, steel and silver. But what would happen if Geralt lost his weapons?
Andrzej Sapkowski returns to his most popular hero in a stand-alone novel where Geralt fights, travels and loves again, Dandelion sings and flies from trouble to trouble, sorcerers are scheming ... and across the whole world clouds are gathering - the season of storms is coming... 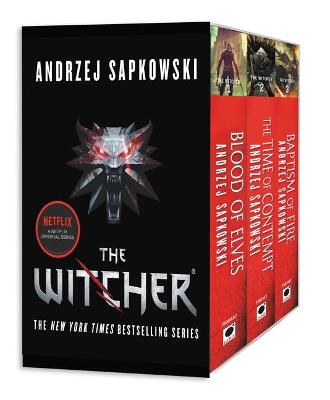 The Witcher Boxed Set: Blood of Elves, the Time of Contempt, Baptism of Fire 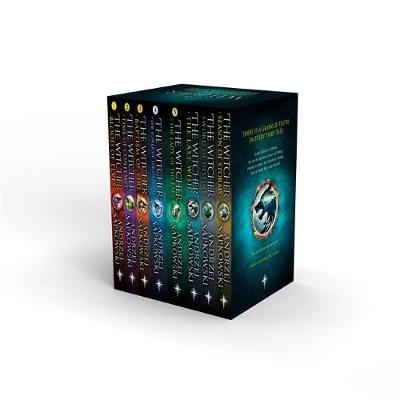 Meet Geralt of Rivia - the Witcher - who holds the line against the monsters plaguing humanity in the bestselling series that inspired the Witcher video games and a major Netflix show.

The Witcher's magic powers and lifelong training have made him a brilliant fighter and a merciless assassin.

Yet he is no ordinary killer: he hunts the vile fiends that ravage the land and attack the innocent.

Andrzej Sapkowski, winner of the World Fantasy Lifetime Achievement award, started an international phenomenon with his Witcher series. This boxed set contains all eight books: THE LAST WISH, SWORD OF DESTINY, BLOOD OF ELVES, TIME OF CONTEMPT, BAPTISM OF FIRE, THE TOWER OF THE SWALLOW, THE LADY OF THE LAKE, SEASON OF STORMS. 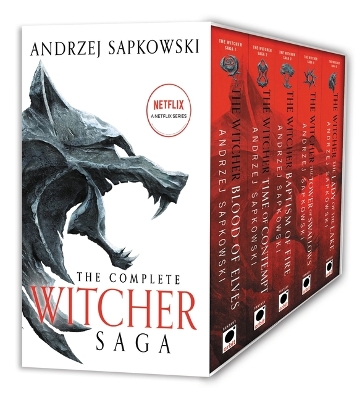 The Witcher Boxed Set: Blood of Elves, the Time of Contempt, Baptism of Fire, the Tower of Swallows, the Lady of the Lake