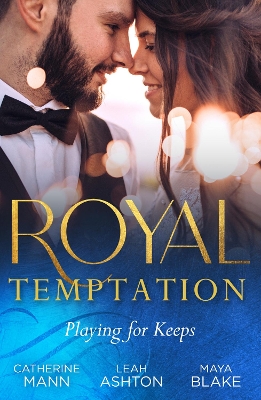 He’d caught her red-handed…and Duarte Medina would use this to his advantage. No reporter infiltrated the royal family, especially not by entering his bedroom window. If Kate Harper wanted her story, she’d have to agree to his terms – to become his fake fiancée. Kate would be his for the next thirty days. And if Duarte had his way…thirty nights, as well.
•
Playboy Prince Marko’s rebellious past hides a wealth of pain – but he’s neglected his royal duties for too long. Now his brother and his country need him, and he’ll do anything to prove he’s changed…starting with finding a fake fiancée! Elite bodyguard Jasmine Gallagher has been hired to protect the Prince, not get swept into his glamorous world. But will she end up falling for the man behind the crown?
•
Before taking the throne, Crown Prince Remirez Montegova must do two things: find a wife, and resolve the royal scandal unintentionally triggered by stunning waitress Maddie Myers. Remi solves both problems by striking a deal with Maddie to become his Queen! But what will happen when their arrangement starts to feel anything but convenient?