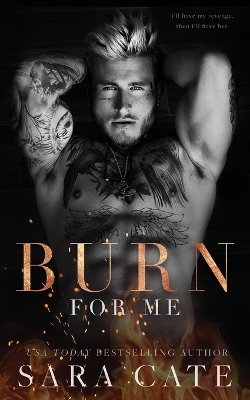 The blurb says Cullen Ayers is covered in red flags but, from the moment we meet his 18-year-old self, he’s just a despicable human being. A hint of that shows in the prologue when we see him at 10 years old, but at least a child that age has half an excuse. Sure, the guy went through a lot in the subsequent eight years but it seems as though he hasn’t grown up at all. He’s prepared to blame Everly for everything that’s gone wrong in his life, even her being in his head, yet he refuses to accept responsibility for letting her get inside in the first place.

While we’re on the subject of Cullen, he’s both cocky and immature. He’s unable to figure out whether his need for revenge or his feelings for Everly is more important. He can’t deal with her lack of reaction to his changing plans lacks the emotional capacity to admit when his feelings have changed. In fact, I’d go as far as to say that Cullen acts like a child when Everly doesn’t rise to his baiting.

Cullen gains surprising emotional insight after he fears Everly’s being taken from him, even though he reacts to that by falling back to anger and hate. Everly sees him clearly, understanding that he’s using the present to fix the past, punishing himself for letting himself feel anything other than anger and hate. It’s unfortunate that it takes him so long to catch up with her, but maybe that’s something about being 18 years old.

This review isn’t all Cullen-bashing. I wasn’t a particularly big fan of Everly either. At the start of chapter 1, her head is still back in her heyday eight years previously, while her life has moved on leaving her behind. We read the book in the knowledge that Everly could have stopped everything happening if only she’d immediately reported Cullen’s behaviour. Instead, she gives in to her misguided sense of right and wrong, which left me feeling that she was inviting trouble into her life.

Despite my dislike to the characters (and I’m fairly sure, in the case of Cullen, that was Cate’s intention), Burn For Me reads well and has enough interesting twists and mysteries to hold your interest. The sex is steamy and, if you like it dominating and dubious, it’ll be right up your street.