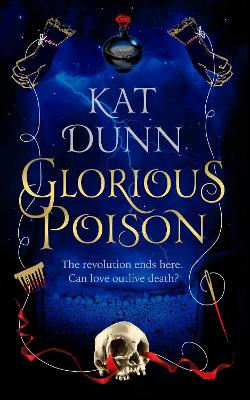 The daring and dramatic conclusion to Kat Dunn's epic C18th French Revolution YA trilogy 'with lashings of lust, love, sacrifice, betrayal and horror'.

Robespierre is dead. The Reign of Terror is over. As Royalist strength grows, the Duc de L'Aubespine plots a coup that will consign the revolution to history. With Olympe in his clutches, he believes nothing can stop him. But he's reckoned without the intrepid Battalion of the Dead!

Reunited in Paris, Ada is poised for action – but if she plays her hand too soon, everything she's sacrificed to gain his trust will be lost. Meanwhile, an unlikely alliance with an old enemy might be Camille's only option to save Olympe and stop the duc in his tracks.

The glittering and macabre bals des victimes and the eerie catacombs make the perfect backdrop for the final episode of the Battalion's tale.

'Your new YA obsession. Vivid, dark, and complex – I fell under Dangerous Remedy's spell from the very first page' Kiran Millwood Hargrave, author of A Secret of Birds and Bone
'A swashbuckling thrill ride of a debut with protagonists who'll have you on the edge of your seat. This is life or death stuff!' Catherine Johnson, author of Freedom
'Heart-pounding romance, wit, trickery, danger and a uniquely brilliant kind of magic' Kesia Lupo, author of We Are Bound by Stars