Girls at the Edge of the World 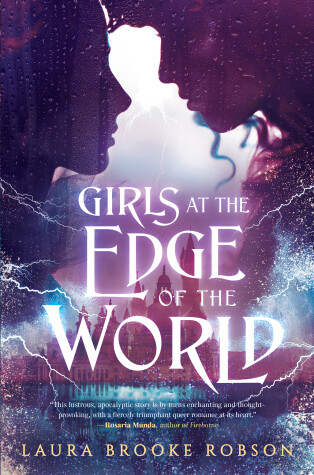 Girls at the Edge of the World

Set in a world on the edge of an apocalyptic flood, this heart-stoppingly romantic fantasy debut is perfect for fans of Rachel Hartman and Rae Carson.

In a world bound for an epic flood, only a chosen few are guaranteed safe passage into the new world once the waters recede. The Kostrovian royal court will be saved, of course, along with their guards. But the fate of the court's Royal Flyers, a lauded fleet of aerial silk performers, is less certain. Hell-bent on survival, Principal Flyer, Natasha Koskinen, will do anything to save the flyers, who are the only family she's ever known. Even if "anything" means molding herself into the type of girl who could be courted by Prince Nikolai. But unbeknownst to Natasha, her newest recruit, Ella Neves, is driven less by her desire to survive the floods than her thirst for revenge. And Ella's mission could put everything Natasha has worked for in peril.

As the oceans rise, so too does an undeniable spark between the two flyers. With the end of the world looming, and dark secrets about the Kostrovian court coming to light, Ella and Natasha can either give in to despair . . . or find a new reason to live.

Well, WOW. I am near speechless & just AH MY HEART HURTS In a good way!!!!

This was just so incredibly... EVERYTHING! Oh my GODDD the prose & the story, both, just astoundingly beautiful, especially the whole slow burn sapphic love story aspect that successfully swept me, SO HARD, off of my feet. (Also May Include: Assassins !, life changing apocalyptic—similar to the Exodus—happenings, & political/ courtly intrigue PLUS a gorgeous, hilarious, found family of girls in an elite royal troupe of aerial silks performers, the Royal Flyers, who live in the Palace, not to mention this very troupe includes the two MCs!!! Yay!)

This novel is truly something extraordinarily written, & I enjoyed it IMMENSELY. I fell in love with both MCs Natasha & Ella (each with their own POVs) IMMEDIATELY! You will root for them as they fight for their survival AND their love story from their very first meet-erm-whatever(?)