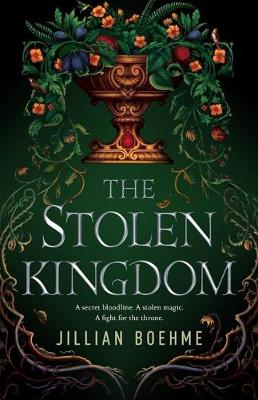 Nothing is quite as it seems in this thrilling YA fantasy adventure by Jillian Boehme, The Stolen Kingdom!

For a hundred years, the once-prosperous kingdom of Perin Faye has suffered under the rule of the greedy and power-hungry Thungrave kings. Maralyth Graylaern, a vintner's daughter, has no idea her hidden magical power is proof of a secret bloodline and claim to the throne. Alac Thungrave, the king’s second son, has always been uncomfortable with his position as the spare heir—and the dark, stolen magic that comes with ruling.

When Maralyth becomes embroiled in a plot to murder the royal family and seize the throne, a cat-and-mouse chase ensues in an adventure of dark magic, court intrigue, and forbidden love.

The Stolen Kingdom is the latest novel to come from Jillian Boehme's mind, and it has a little bit of something for everyone. Magic, romance, action, politics, you name it!

Maralyth Graylaern has spent her entire life on her family's vineyard. She loves it there, even if it pains her to see other vineyards suffering from the crown's greed. For you see, while her family manages to survive, many others have been torn asunder by the blight that plagues this land.

A blight that the king has done nothing to aid. Maralyth would have been content to continue her life the way it was, had she not been involuntarily pulled into the politics of her kingdom. Now she won't turn her back on it, not after what she has seen.

"A famous vinter who provided drink for the tables of a king ought to have been well off. We were left each year with barely enough to live on."

The Stolen Kingdom was a fun and thrilling read, one that was rich in detail and intrigue, which is something that I can never complain about. Maralyth's story was a fascinating one, bringing in magic and politics in ways that I wouldn't have expected.

Overall, I enjoyed this story, though there were times when this story felt a little lighter to me. Despite everything that was at stake (the health and safety of an entire kingdom!), it never felt quite real.

On the bright side, I adored the magical system and the overall vineyard aesthetic. Many fantasy fans will surely enjoy those elements, as it puts a unique take on the world. The romantic subplot is sweet and helps to humanize the characters even further.

The Stolen Kingdom is a pretty quick read. It didn't feel like a 300 plus page book. It didn't read like it either. While it had its ups and downs, it did do a solid job of constantly moving the plot forward.

One of the things I loved about The Stolen Kingdom is that this could easily be a standalone novel, or Jillian Boehme could easily pick up where the plot left off and continue off on another adventure.

Thanks to Macmillan-Tor/Forge and #NetGalley for making this book available for review. All opinions expressed are my own.