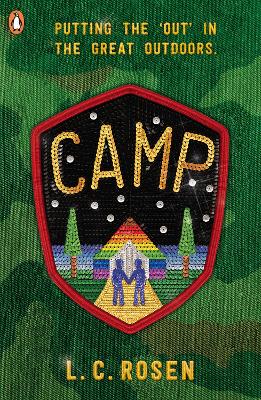 'The gay summer camp romp of my dreams' - Cale Dietrich, author of The Love Interest

This year, though, it's going to be different. Randy has reinvented himself as 'Del' - buff, masculine and on the market. Even if it means giving up show tunes, nail polish and his unicorn bedsheets, he's determined to get Hudson to fall for him.

But as he and Hudson grow closer, Randy has to ask himself how much is he willing to change for love. And is it really love anyway, if Hudson doesn't know who he truly is?

Praise for Jack of Hearts (And Other Parts)

'This book is filth' Julian Clary

'Humane, sex-positive writing of the funniest, filthiest and most heartening kind' The Guardian

Randy Kapplehoff is a self proclaimed theatre connoisseur, gentle, compassionate and fabulously queer. Each summer, Randy escapes small town Eastern Ohio for Camp Outland, a camp for adolescents identifying as queer to celebrate their identities and individuality within a supportive environment. Randy has undergone a transformation this year, a masculine and muscular version of himself in the hope of snagging himself a boyfriend. Not just any boyfriend but the manly man of men, Hudson. Gone are the unicorn bedsheets, the showtunes and nail polish in a lovely shade of Unicorn Trampocalypse and hello to sportsball, highfives and friendly arse patting. Strictly in a that was a great thing you did with that sportsball kind of way.

Randy is a brilliant character, sixteen and crushing entirely too hard on Hudson. After a small and totally normal amount of internet investigation, Randy learns that Hudson only likes masculine, straight presenting men, feminine or androgynous people need not apply. Hudson is an interesting character, his enthusiasm and tenacity is intoxicating but beneath his audacious manly man exterior is a scared young man and casualty of his environment. When Hudson came out to his parents, they were less than accepting so for Hudson, playing the straight presenting, various sportsball loving son was a coping mechanism to feel accepted. Supportive, understanding Randy gently helps Hudson to see that feminine or androgynous people are not stereotypes, having a preference for Unicorn Trampocalypse nail polish and being gay is not mutually exclusive.

Camp Outland is a wonderfully supportive environment and employs predominately queer counsellors and team members, understanding the issues facing queer teens. I imagine that many queer teens who are facing upheaval and adversity in their lives would benefit from having someone to talk to who understands and has been through similar experiences and it was a lovely touch to see the camp adults interacting with campers so positively and compassionately. The counsellors arrange activities so the campers don't have many opportunities to get it on but are incredibly sex positive and well aware that large groups of teens are going to get frisky and encourage safe sex, even providing protection for those hooking up. It's just another aspect of L.C. Rosen's novels that I absolutely love, acknowledging that some teens are sexually active and consent and education on being safe are so incredibly important.

Although Camp is a hilariously fun read, it also discusses toxic masculinity, prejudice, self esteem and mental health, both Randy and Hudson express feelings of isolation and feelings of erasure as both young men feel they need to conceal their identities to be accepted by straight, often queerphobic society. It highlights the need to create inclusiveness within our communities and as allies, to boost voices within the queer community to educate and spread awareness.

It was absolutely brilliant! L.C. Rosen is a remarkable author creating brilliantly entertaining queer young adult novels with heart and a side of jazz hands. Superb!