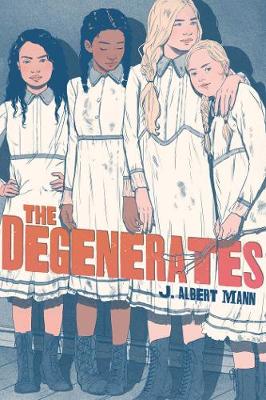 "Respectful, unflinching, and eye-opening." -Kirkus Reviews
"Historical fiction that not only depicts a cruel, horrifying reality but also the strength and courage of the people who had to endure it." -Booklist

In the tradition of Girl, Interrupted, this fiery historical novel follows four young women in the early 20th century whose lives intersect when they are locked up by a world that took the poor, the disabled, the marginalized-and institutionalized them for life.

The Massachusetts School for the Feeble-Minded is not a happy place. The young women who are already there certainly don't think so. Not Maxine, who is doing everything she can to protect her younger sister Rose in an institution where vicious attendants and bullying older girls treat them as the morons, imbeciles, and idiots the doctors have deemed them to be. Not Alice, either, who was left there when her brother couldn't bring himself to support a sister with a club foot. And not London, who has just been dragged there from the best foster situation she's ever had, thanks to one unexpected, life-altering moment. Each girl is determined to change her fate, no matter what it takes.

This book will absolutely break your heart, but it will also give you hope and inspiration at the strength of human spirit. Back in the day (this is set in the 1920s), anyone who was different (in really any way, but in this book, we are dealing mostly with developmental differences, though race and general disability seem to have a role as well) was deemed "wrong". And in this story, we follow four young women who were deemed such, and who very much are not, in any way, "wrong". The world being more brutal and intolerant of differences acted upon this by institutionalizing these women.

Truly, their journeys are absolutely the highlight of the book, and also the hardest part of the book. You know that so many people existed in these very conditions, and it's quite difficult to read at times. But if you can handle it, it's something we really should be reading about. There are still plenty of injustices in the world, and putting ourselves into the shoes of another can only generate more empathy and humanity.

While I adored the characters, I couldn't help but feel a bit disconnected from them. I can't quite pinpoint why, but I just didn't feel like I was totally immersed in their world, even though I did care about them as characters. I will also say that there are a few times that I thought the book felt a bit draggy in the middle, which is maybe unfair because I am sure the lives of these women were also monotonous at times, but it felt worth mentioning.

Bottom Line: The good absolutely outweighed the bad, as I was grateful to have this glimpse inside such a horrible atrocity inflicted upon such strong and lovely young women.