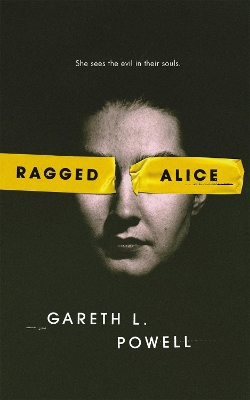 
Warnings: Ragged Alice is a thriller/detective series through and through. And that means that there is some more graphic content within it. In this case there are some graphic murders. (Additional spoiler warning here) To make it worse, one of the victims turns out to be pregnant. I know that this is a sensitive subject for some, so consider yourself warned.
Ragged Alice was a fun and quick read. Gareth L. Powell did a brilliant job of setting the scene in a very short period of time. Yet it all felt organic, and never once did I feel like I was being rushed along with the plot.
I honestly wouldn’t have minded if there had been more for me to read. I really enjoyed Holly’s character, and would love to see her investigations turned into a series. Then again, I can see why Powell would choose to leave it as a standalone. So I guess I’ll just be happy that I got a chance to read this novella.
The plot itself was fascinating. There were some perspective jumps, but not as many as expected. Yet those very jumps allowed for the plot to be pushed along, while also raising doubt and questions about what was actually happening. It was very well done.
I think my only complaint about the novella, and I do mean my only complaint, would be some confusion in the middle. A specific event happened to Holly, and now that I know the truth behind what was happening…that event makes less sense. I don’t want to say more than that, for sake of spoilers, but I will say that I no longer understand the motivation behind the antagonist at that moment.
But as far as complaints go, that is a relatively minor one. I enjoyed almost every other element in this novella. And it probably goes without saying that I read the entire thing in one sitting – and found myself wishing for more.
I’ll be honest with you; I had never read anything by Powell before this novella. But after having read Ragged Alice, I can honestly tell you that I’m sold. I love his writing style, and the way he builds up his stories. Clearly I’m going to have to go and check out more of his works.