Of Wars, and Memories, and Starlight (Xuya Universe) 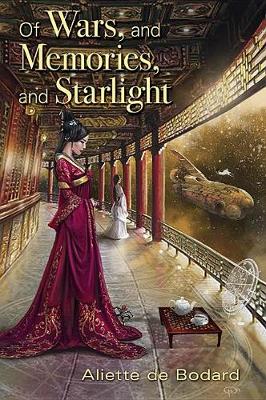 Of Wars, and Memories, and Starlight (Xuya Universe)

A major first collection from a writer fast becoming one of the stars of the genre… Aliette de Bodard, multiple award winner and author of The Tea Master and the Detective, now brings readers fourteen dazzling tales that showcase the richly textured worldbuilding and beloved characters that have brought her so much acclaim. Come discover the breadth and endless invention of her universes, ranging from a dark Gothic Paris devastated by a magical war; to the multiple award-winning Xuya, a far-future space opera inspired by Vietnamese culture where scholars administrate planets and sentient spaceships are part of families.

In the Nebula award and Locus award winning “Immersion”, a young girl working in a restaurant on a colonized space station crosses paths with an older woman who has cast off her own identity.

In the novelette “Children of Thorns, Children of Water”, a shapeshifting dragon infiltrating a ruined mansion finds more than he's bargained for when his partner is snatched by eerie, child-like creatures.

And in the award-winning “Three Cups of Grief, by Starlight”, three very different people—a scholar, an engineer, and a spaceship—all must deal with the loss of a woman who was the cornerstone of their world.

This collection includes a never-before seen 20,000-word novella, “Of Birthdays, and Fungus, and Kindness”, set in Bodard's alternative dark Paris.

I received a copy of Of Wars, and Memories, and Starlight through NetGalley in exchange for a fair and honest review.

Of Wars, and Memories, and Starlight is a short story collection written by Aliette de Bodard. She’s an up and comer in the science fiction and fantasy world, and she deserves all of the attention she can get.
Aliette de Bodard writes science fiction and fantasy in such a way as to feel utterly human. And that fact becomes very notable in this collection, as it is full of women, mothers, and daughters, people of all ages and colors. It’s a beautiful variety to be found, while also showing us that all humans have a place in her fantastical settings.
There are thirteen short stories and one novella to be found within these pages. The short stories include: The Shipmaker; The Jaguar House, in Shadow; Scattered Along the River of Heaven; Immersion; The Waiting Stars; Memorials; The Breath of War; The Days of War, as Red as Blood, as Dark as Bile; The Dust Queen; Three Cups of Grief, by Starlight; Salvaging of Ghosts; Pearl; and finally, Children of Thorns, Children of Water. You can find my mini-reviews of all of these below.
Then there’s the novella, Of Birthdays, and Fungus, and Kindness. Of Birthdays, and Fungus, and Kindness is the only piece in this collection not to be found anywhere else. And thus it’s a highly notable piece – and one Aliette de Bodard’s fans are not going to want to miss out on.

“Most books had silent women, or women who used their looks as a weapon. There were no female friendships. There were no mothers, no families. People drank coffee and spoke English, and most of them were blond and pale-skinned.”

The Shipmaker
As you might have guessed from the title of this short story, The Shipmaker is about well…a shipmaker. But the tale is so much more complex than that. This is the story of how one civilization creates its ships. And how love and loss affect us all – and why one should always take the risk, regardless.
The Shipmaker was a beautiful and ethereal story. And it is the perfect short story for setting the tone in this collection. There’s this ephemeral sense to this story, and the way it ties love and loss, risks and rewards, so tightly to one another.

Immersion
Immersion is a fascinating story about what technology can do to and for our appearances. Or more accurately, what it can do for our outside facing avatars. It’s easy to see how a society could come to expect them. And likewise, to see how some people would become hopelessly addicted to them, as well as the virtual world they’re granted access to.
This was a thrilling yet depressing short story. On the one hand, the setting and writing are absolutely splendid. On the other hand, it’s not afraid to dive into theories about what could happen to people more vulnerable to this sort of addiction, and how lost they might become.

The Waiting Stars
Memories, deception, and kindness. Those are all dominant themes in The Waiting Stars. Catherine was one of several girls rescued and placed in an orphanage together. They were told that they were gifted wit this – while always being looked down upon. And yet something never felt right to Catherine. Then one day, it all became crystal clear in her mind.
The Waiting Stars was an intensely interesting and captivating story. It has a lot of similar concepts and elements as seen in other short stories in this collection, and thus doesn’t need quite as much of an introduction. And yet it’s one of my favorites. It’s a heartbreaking story at points, but it’s also deeply moving and marvelously written.

Memorials
Memorials is a fascinating short story, in which Aliette de Bodard explores concepts of the self, life after death, and so much more. This is the story of what we leave behind – and how some people in a society will always find a way to take advantage of even that.
Wow. This story was something else. It’s a compelling read, and I loved reading every minute of it. For a short story, it had a shocking amount of twists and turns, all of which perfectly supported this thought-provoking tale.

The Breath of War
The Breath of War introduces us to a world in which every person has a natural counter. There’s the human, and then there’s the stoneman/woman. Without this partnership, no child would ever survive past their birth. And that is why Rechan is desperately seeking out her counterpart, before it’s too late.
This short story was nothing like what I expected, thanks to the name. And yet it was so incredibly fascinating. This is one of those stories that feels like there’s so much more to it. In fact, I’m going to make a point of checking and seeing if Aliette de Bodard has written anything else in this world, because I want to read it.

The Dust Queen
The Dust Queen is another short story that focuses on loss and memories. What would you give, in order to be free of your memories and pain? Would it be worth the price? This entire piece is set in an intricate world full of lore and history. And it feels all the more real for it.
The Dust Queen is another favorite of mine from this collection. It’s easy to read this piece and find yourself in the position of either the protagonist or the Dust Queen herself. And that is slightly unnerving. But it serves to make a powerful point.

Salvaging of Ghosts
Set in the depth of space, Salvaging of Ghosts is all about a scavenging crew. They’re the ones who go about collecting scraps from crashed or abandoned spaceships. And they do so despite the risks. And those risks are made very clear from the recent loss that Thuy – the protagonist of this story – is dealing with.
Salvaging of Ghosts is perhaps one of my favorites from this collection. Thuy’s journey is powerful, being both emotional and full of so much determination and acceptance. I’m not going to say more than that though, because I don’t want to spoil it.

Pearl
Pearl is a brilliant and endearing story about a young man and his faithful little drone. Both were overlooked until one day they proved just how useful they were – as long as they worked together. But will it be enough to stop what’s coming? It’s also worth noting, this is the sole retelling to be found in this collection.
Pearl was a fascinating read. In some ways, it had the most endearing elements in it. In others, it was fun trying to puzzle together what was really happening. I enjoyed reading the story itself, while also trying to pick up on all of the subtexts.

Children of Thorns, Children of Water
Children of Thorns, Children of Water combines science fiction and fantasy into one. It is the story of something other taking over a body (which seems to be the opposite of many of the themes in this collection). And all the changes that can bring with it.
This short story probably took me the most effort to get into, perhaps because in many ways it felt the most different of the lot. I’m not entirely sure. I did end up enjoying it in the end though, for which I’m grateful for.