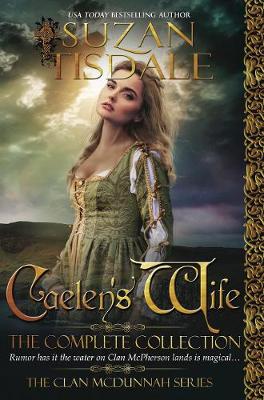 The complete collection of the Caelen's Wife Series includes A Murmur of Providence, A Whisper of Fate, and A Breath of Promise.

Rumor has it the water on Clan McPherson lands is magical....

Clan McPherson has known peace amongst their neighboring clans for more than one hundred years. That peace is threatened when Fiona McPherson is made chief after the death of her husband.

Known more for her fighting skills than her beauty, Fiona refuses the multiple proposals of marriage that begin to seemingly arise from nowhere. She may be the chief of her clan, but she's still a woman. It isn't Fiona they want, but her land and she's willing to fight to the death to keep it.

Rumor has it Caelen McDunnah has lost his mind...

Caelen McDunnah, the chief of Clan McDunnah, has no desire to remarry. He's perfectly content to still mourn the loss of his first wife and babe, even if it has been sixteen years. Until he meets the beautiful and feisty Fiona McPherson.

Known to start a fight out of sheer boredom or madness - no one is ever truly sure which - Caelen suddenly finds himself in the middle of battles he has no desire to fight, but fight them he will if it means he can have Fiona McPherson as his own.

There is always a wee bit of truth in every rumor.

Oh my Lordy!! I absolutely love a good highland historical romance and this one was AWESOME! It was emotional, sweet, funny and passionate... in a perfect audiobook way. See, I'm finding myself content to have the door shut in my face (for the intimate scenes) when it comes to audiobook listening. I still want to 'see' the connection and believe there is passion between the couple. I just find it a wee bit weird having a narrator get all hot and heavy in my ear as I'm nodding my head in *Good Morning* to my fellow walkers. I also find it a tad uncomfortable to have a talented male narrator with a mature voice talk about *thrusting manhoods ... enveloping sheaths ... finding ecstasy... * I could go on but you know (wink, wink) what I'm talking about.

Talking about narrators, Brad Wills was phenomenal. His ability to change with the characters was brilliant and very entertaining. He even sang for me and had me sniffling on my walk with the emotions he evoked. A truly talented narrator and I will be looking for more of his narrations, especially if it's more of Suzan Tisdale's stories.

I really loved the romance between Caelen and Fiona. It was definitely a slow burn kind of romance because they had a wee bit of emotional baggage to deal with first. They had both been married before and thought what they had shared with their partners was love. Both Caelen and Fiona seemed determined to avoid happiness and love because they were scared of having their hearts broken again. Unfortunately, they were both Lairds of their clans which created a further barrier to finding love again. Fiona is the Laird of a smaller clan and she worried that her clan would be absorbed into Caelen's larger one. Caelen worried that his duties to his clan would take priority over his wife... again.

In the background of their love story, we also have to deal with clan politics, greedy rivals and deceptions that could lead to war.

Honestly, I'm so glad that this audiobook was provided as a complete collection. I know my enjoyment would have been lessened if I'd had to wait between instalments. The pace was perfect, the storyline was riveting, and the connection between Caelen and Fiona was easy to 'see'. I'm kind of hoping that Suzan Tisdale considers adding more of her wonderful stories to the Audible Escape package. I will definitely be back for more.