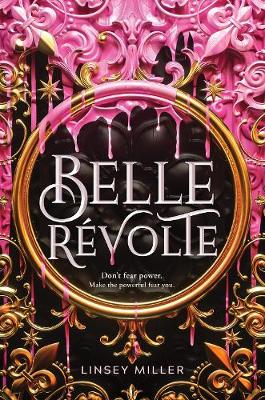 From the author of the Mask of Shadows duology comes this fast-paced YA fantasy, where two young women must trade lives, work together to stay alive, and end a war caused by magic and greed

Emilie des Marais is more at home holding scalpels than embroidery needles and is desperate to escape her noble roots to serve her country as a physician. But society dictates a noble lady cannot perform such gruesome work.

Annette Boucher, overlooked and overworked by her family, wants more from life than her humble beginnings and is desperate to be trained in magic. So when a strange noble girl offers Annette the chance of a lifetime, she accepts.

Emilie and Annette swap lives―Annette attends finishing school as a noble lady to be trained in the ways of divination, while Emilie enrolls to be a physician's assistant, using her natural magical talent to save lives.

But when their nation instigates a terrible war, Emilie and Annette come together to help the rebellion unearth the truth before it's too late.

Belle Révolte is "a welcome twist on the tropes of sword and sorcery novels" (School Library Journal), perfect for readers looking for:

Absolutely loved it! Was a little confused at the beginning as the characters are all quite similar but amazingly diverse characters, asexual sapphic representation, FF romance, they / them pronouns, non binary characters, it was amazing!
Review to come.
Actual rating: maybe 2.5 stars.

This book was... a little odd. I think the biggest problem is I didn't click with so many parts of it. The writing style felt oddly vague and slightly disjointed. I found myself rereading pieces over and over again because I was like, "Wait... what just happened?" or "...who is she talking to again?" I just lost track of what was even happening; I couldn't follow along very well for some reason. It was just hard to pay attention.

Everything was just okay. The main characters were okay; I wasn't super invested in either of them. The side characters were unmemorable; sometimes I forgot who was who. The magic was okay, and actually kind of confusing. I'm not sure I ever understood it, but after a certain point I could pretend I did. I wanted to like all the political stuff, but in the end I just couldn't bring myself to get super interested.

After a certain point I realized I wasn't loving the book. I didn't hate it, but I was "eh" about it. Normally I'd DNF because lately I just don't want to be reading books I don't love; I'd rather move on. But, my main motivation for reading this book was for the ace rep, and I hadn't even gotten there yet! View spoiler to see around when it finally shows up: 60-70% through! For about 2 seconds. Once I hit the ace rep, I skimmed the remainder of the book.

The best thing about this book was the chapter headings.

Full review to be published soon at http://kaitplusbooks.com!
I received a copy of Belle Revolte through NetGalley in exchange for a fair and honest review.

Belle Revolte is the latest high fantasy novel to spring from the mind of the one and only Linsey Miller. If you’ve looking for a novel full of excellent representation, then this is a book worth checking out. It was the rumor that there’s an ace main character that drew me to this book, and I imagine I’m not the only one.
Emilie des Marais only ever wanted to be a physician and failing that, a hack. It’s what her magic called her to do, but unfortunately society – and her family – were not inclined to listen to her calling.
Annette Boucher is a daughter passed over, with all of the family efforts focused on her brother. But that’s all the more reason for her to jump at an opportunity when handed to her. For all she’s ever wanted was to be trained in magic.
When these two girls cross paths, they hatch a plan. One that would allow them to both get what they want. But it is not without risk. But what risk wouldn’t be worth the chance to actually do something with your life?

“You are not the people who love you or the people you’ve lost. They’re just parts of you. You are so much more than you’ve been led to believe.”

Warnings: Belle Revolte may cover a fantasy world, but it touches upon some very real – and sometimes upsetting – subjects. These instances include gore, medical neglect, abuse, sibling death, neglect, and drowning. Just to name a few.

Belle Revolte was a fascinating and thrilling read, one that hooked me and refused to let go. I loved reading about Emilie and Annette, especially as the novel got further into the story – and the dangers they faced.
Okay, so I actually had a bit of trouble getting into this book. That was a surprise to me, since I was insanely excited to get my hands on it. But once I hit about the thirty (maybe forty) percent mark, I was well and truly hooked. So if you’re struggling with this read, just give it a few more chapters and see how you feel. It worked out for me.
Honestly, there was a lot to love about this novel. The setting, for instance. It’s a fantastical version of France, one full of magic, and of course, politics and expectations. That makes the perfect framework for the magical system, which intrigued me right from the get-go – and with good reason.
I also adore that this is a standalone novel, and thus is very easy to get into. Add in the amazing level of representation and consider me sold. I feel like a lot of people will be able to resonate with the characters in this book, so I hope that it really helps somebody out there.
You can find the full review and all the fancy and/or randomness that accompanies it at It Starts at Midnight

So. I will start out fully honestly and tell you that I almost DNFed this one at numerous turns. The beginning just seemed so very dull and unrealistic. I mean, there's really no explanation why either of these complete strangers would want to, let alone be able to, fully trust the other woman with her literal life. Look, if some rando comes up to me and wants to life-swap... fine, I'll be tempted but ultimately my mom taught me about Stranger Danger, so. And we jump right into the switcheroo, like it's business as usual. It was hard for me to suspend disbelief is what I am telling you here.

The characters seemed a little too similar to me at first, too. They just didn't start the book particularly fleshed out, and they were pretending to be each other, and there were so many other people around, I just got kind of overwhelmed. And the pacing just felt super draggy, I must say. At least for the first half. Then, things pick up, and since I am already half way in, I just keep going because I am determined to a fault, apparently. And it did get better! I started to actually care about the characters, enough that I did want to finish the book. The problem here is, I can't really tell you much of what I liked because it's all at the end and those are spoilers. But the pacing does pick up, and the characters definitely develop more over the course of the book.

Also! It's a standalone, so you're not invested forever. The concept of the doctors is pretty cool (and dark, but that's always fun) and again, I can't say more, but that was a plot point that I really enjoyed. I also liked a lot of the camaraderie each woman eventually found in her respective place. Again, vague on purpose. This is hard, let's stop.

Bottom Line: It started so slow and unbelievable, but did eventually get to the point where I cared about the characters and what happened to them, so. It's hard to give a definitive bottom line, kind of depends on whether you want to invest in the "meh" beginning.
This novel centers around two young adults who swap lives to follow their dreams. One wants nothing more then to become a physician and to achieve things beyond those of the noble lady her mom is pushing her to be. One wants nothing more to be trained in magic and to prove that she is more then her station in life and that divination is where she will thrive. In order for this to happen Emilie hatches a desperate plan with no planning as she spots a random girl who looks enough like her that they are able to switch roles and both move on to the education they so want. In this world men get to train as physician and nobles get higher safer position in their field those girls must fight obstacles after obstacle to gain strides in their chosen professions. Underneath all of this is an underlying problem with the magic side of this realm. Magic has a cost and in order to avoid this cost the rich use lower rank "Hacks" to perform the magic and to get the recognition from achieving great things.
When Emilie and Annette uncover what is happening to the lower ranks beyond being hacks all hell break loose and intensity really hits the fan. What really made this novel stand out is even though these two characters never met before they decided to swap lives they really connect and care for each other.
The amount of emotion that pours from those pages as they fight for each other and for the betterment of their worlds is heart wrenching. This novels has just about everything you can want in a novel. Their magic, heart ache, lower and upper class turmoil, dark hidden secrets and of course some sweet romance. Make sure to check out this novel in February 2020.