Quincredible Vol. 1: Quest to Be the Best! 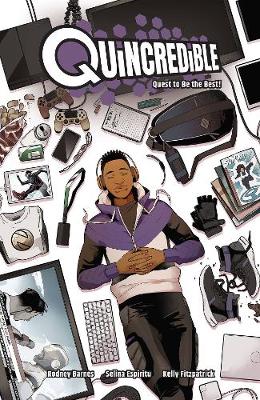 Quincredible Vol. 1: Quest to Be the Best!

Invulnerability is a pretty useless superpower if you’ve only got a one-hundred pound frame to back it up. That’s what Quinton West’s life became when he went from small guy who got beat up to small guy who can’t get hurt after the meteor shower dubbed “The Event” gifted him the power of invulnerability but no other powers to compliment it.

But there’s more to Quin than meets the eye, and after some encouragement from his new mentor—a local New Orleans–based superhero named Glow—Quin realizes that he can use his quirky hobby of creating Rube Goldberg devices to outsmart the opposition. But being a hero paints a target on your back, and Quin’s got to risk it all to join the ranks of the superheroes he looks up to. It’s a good thing he can take a punch.

teenage vulnerability and invulnerability. Quinton West is a genius and living in New Orleans. He's a high-school sophomore and after THE EVENT he is gifted with invulnerability and he has to decide what he's going to do with that power. He's always wanted to be a superhero but the reality isn't quite that much fun.
It's fun and full of a variety of people and a good mix of realism and fantasy.
Borrowed from Dublin City Libraries.