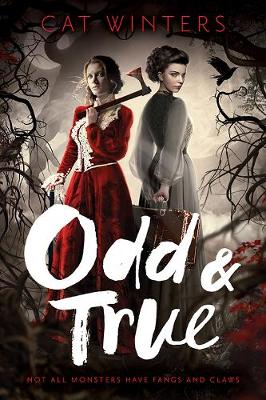 Trudchen grew up hearing Odettes stories of their monster-slaying mother and a magicians curse. But now that Trus older, shes starting to wonder if her older sisters tales were just comforting lies, especially because theres nothing fantastic about her own lifepermanently disabled and in constant pain from childhood polio.

In 1909, after a two-year absence, Od reappears with a suitcase supposedly full of weapons and a promise to rescue Tru from the monsters on their way to attack her. But its Od who seems haunted by something. And when the sisters search for their mother leads them to a face-off with the Leeds Devil, a nightmarish beast thats wreaking havoc in the Mid-Atlantic states, Tru discovers the peculiar possibility that she and her sisterdespite their dark pasts and ordinary appearancesmight, indeed, have magic after all.

I ADORE the cover on this one. Fabulous representation of the story. Great use of graphics. Great composition and title work.

What a delightful little book this turned out to be. I thought going into this one that I was going to get something along the lines of the TV show Supernatural just with two sisters that chase monsters. What I ended up getting was very different than that and in my opinion so much better.

This was a book about sisters who would do anything for each other. About the twists and turns their lives took. About one sister who spun these fantastical tales and about another sister who despite being disabled isn't afraid to forge her own path forward. The sister bond in this book was one of the best I have read to date. Told in dual POVs that jumps back and forth in time (usually, something that I find off-putting but worked incredibly well in this book) this story kept me captivated from page one. It was fantastically well written and paced. It was magical and heartbreaking. The characters were engaging and well developed. I love the folklore the authors weave into the plot as well.

Not much more to say about this one. I loved it, and if you are looking for a beautiful, unique, and magical book with strong females characters, then this one should be added to your list ASAP. Two HUGE thumbs up from yours truly.

You can find the full review and all the fancy and/or randomness that accompanies it at It Starts at Midnight
The beginning started a wee bit slow for my taste, but after that it picks right up and gets so, so good! I actually didn't quite expect it to go in the direction it did, which for me was a huge plus! Let's talk about more positives, shall we?


Bottom Line: If you're a fan of historical fiction, this is a must-read. And if you just flat out like reading about sisterly bonds, this is also the book for you! I'll just be over here impatiently waiting for Cat Winters's next release if you need me.

Odd and True is the electrifying yet heartwarming story of two sisters who team together to hunt monsters in early twentieth century America.  I’m always in favor of a good story about sisters, and Odd and True puts that relationship in the forefront, as the protagonists—Odette (Od) and Trudchen (Tru)—support each other even as they work through different opinions and try to come to terms with the fact that both of them have secrets.

Family in general is at the forefront of the story, as Od and Tru deal with their troubled past in different ways—partially because, as the older sibling, Od has totally different memories of their early childhood than Tru does.  The book switches between their points of view, with Tru narrating the present day action of their new quest to hunt down a devil they believe to be terrorizing the area around Philadelphia, while Od’s chapters focus on the past—her childhood and then a few teen years she spent away from true.  The result is a richly textured story that addresses love, loss, identity, and the definition of family itself.

The monster hunting aspect of the story is deliciously creepy yet not always the most compelling part of the story.  Winters plays coy, making readers wonder what exactly about monsters is real and how the story as a whole is going to play out.  It’s also worth noting that she keeps the story tight by featuring one primary monster the sisters go after.  This may be disappointed to readers who expected a little more gallivanting and epic showdowns, but I really liked it.  Some books in a similar vein cram in so many monsters that the fights seem episodic or even repetitive; Winters builds the excitement up around one main moment that’s really worth it.

I had never read a book by Cat Winters before Odd and True, and I was pleasantly surprised by how much I enjoyed it.  If you read my reviews regularly, you probably know I have a tendency towards disgruntled mutterings about the sad state of prose in contemporary, particularly YA fiction (as much as I love YA).  Well, Winters’s prose is beautiful.  She drew me into the story with it from the opening pages, and the beauty never flagged. The chapters from Odette’s point of view have a particular tendency towards the magical and whimsical which really worked with Winters’s style.

I would be willing to read another novel by Winters just because of the writing in this one, but the story and character development are also remarkably well done.  It’s a great blend of magic, historical fiction, and real world issues.  Highly recommended.
Odd and True is brilliantly written! I was kept on the edge of my seat always wondering what was going to happen next, if the monsters were real or not. This story gave me the whole “what is hiding around the next corner” feeling. It was tantalizing to my spidey senses. When I chose to read this book, it was because I really wanted a fast and furious monster hunt with maybe even a little gore. That is not what this story was about and I will admit I was disappointed. What this story really is about is the bond between two sisters, their love for each other and what family really means.

As children, some of us are told fairy tales and clinging to those ideas of magic and mystery as a child is wondrous. As we grow though, we realize that life is not made up of fairy tales and monster hunts, that is of course unless you are Odette and Trudchen Grey. They grew up their whole childhood being told they descended from monster hunters. They believed that their mother and her siblings were great monster hunters and that their legacy was to continue hunting those very same monsters. I thoroughly enjoyed all the ways the sisters would try and stave off the monsters they knew trying to get to them.

When Od & Tru were little, the sisters would go around collecting tales of monsters that terrorized their local neighbors. Writing down the tales and illustrating them was how the girls were planning on identifying the monsters that they would someday slay. I loved reading about how the girls spent their time together planning how they would have grand adventures where they would help those in need. They spent every day together until for reasons unexplained to Tru, Od was sent away by their Aunt Vik. Without her sister’s unfailing faith, Tru slowly began to question if everything that they had been told was true.

After she left, Od would write letters to Tru detailing her adventures but Tru always felt that something was missing. It was not until Tru’s fifteenth birthday that Od came back to see her by way of Tru’s window. Od had returned to get Tru so that they could go off on a grand adventure, together, as it should be. The adventure that they embarked on was something wondrous and miraculous but at the same time misconceptions were revealed and neither girl would ever be the same.

Although this story was not what I desired I appreciated it all the same. The relationship between Od and Tru was funny, endearing, and frustrating. I felt that the writing was captivating and creative. I was brought into the world of Od & Tru and it was a place of wonder where the lines between reality and fantasy blurred. There was heartbreak, monster hunts, and this story is character driven. The pacing can slow down at times but when you finish this story you will find that it was not what you thought it was going to be but that it was an enjoyable read nonetheless.