Magna Carta: The Making and Legacy of the Great Charter (The Landmark Library, #1) 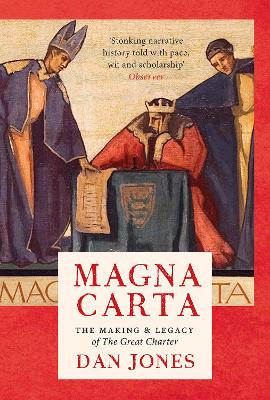 Magna Carta: The Making and Legacy of the Great Charter (The Landmark Library, #1)

A beautifully produced account of the signing, impact and legacy of Magna Carta, a document that became one of the most influential statements in the history of democracy, as part of the stunning landmark library series.

On a summer's day in 1215 a beleaguered English monarch met a group of disgruntled barons in a meadow by the river Thames named Runnymede. Beset by foreign crisis and domestic rebellion, King John was fast running out of options. On 15 June he reluctantly agreed to fix his regal seal to a document that would change the world.

A milestone in the development of constitutional politics and the rule of law, the 'Great Charter' established an Englishman's right to Habeas Corpus and set limits to the exercise of royal power. For the first time a group of subjects had forced an English king to agree to a document that limited his powers by law and protected their rights.

Dan Jones's elegant and authoritative narrative of the making and legacy of Magna Carta is amplified by profiles of the barons who secured it and a full text of the charter in both Latin and English.