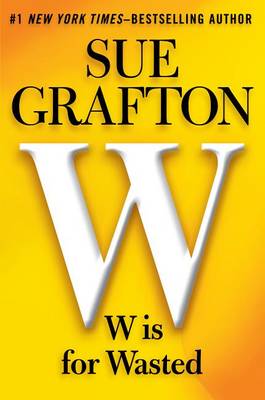 "Two dead bodies changed the course of my life that fall. One of them I knew and the other I'd never laid eyes on until I saw him in the morgue ..." The first was a local PI of suspect reputation. He'd been gunned down near the beach at Santa Teresa. It looked like a robbery gone bad. The other was on the beach six weeks later. He'd been sleeping rough. Probably homeless. No identification. A slip of paper with Millhone's name and number was in his pants pocket. The coroner asked her to come to the morgue to see if she could ID him. Two seemingly unrelated deaths, one a murder, the other apparently of natural causes. But as Kinsey digs deeper into the mystery of the John Doe, some very strange linkages begin to emerge.

I love Kinsey Millhone. But she's not everyone's cup of tea. I started reading the Alphabet series a few years ago - I think at the time it was up to O is for Outlaw. The idea of a mystery series each title beginning with a new letter amused me. I don't know why. I don't think it's particularly original. At least - I've seen a few others since. At the time though it was new to me and it just struck me as perfect. I flew through the series. Kinsey is riveting. She's brash and harsh and charming. She's fierce and flawed. She gets scared. She holds her own. She pushes herself to run often and tackles cases without judgement and with an open mind. Rosie and Henry are brilliant and I love the little family she builds around her.

But Kinsey Millhone isn't Jack Reacher - her speed is more Tracy Crosswhite. [b:My Sister's Grave|22341263|My Sister's Grave (Tracy Crosswhite, #1)|Robert Dugoni|https://i.gr-assets.com/images/S/compressed.photo.goodreads.com/books/1405267054l/22341263._SY75_.jpg|41739579] Her cases aren't full of action and high speed chases - they're slowly nitpicking away until something clicks into place. She writes down all her thoughts and places her facts and ideas on 3x5 index cards - which she often shuffles and rearranges to help her solve her case. And I love it. Kinsey Millhone is great - but she's not for everyone.

For some reason I've seen reviewers compare this to Stephanie Plum - I don't know why - this is absolutely NOTHING like that. Stephanie Plum is a very different character and an extremely different type of book. That's more fluff. Kinsey Millhone is more procedural mysteries. And this series isn't current - it was first published in the 80's - there's not really technology. Messages were relayed by calling the landlines. Paper files were still the main form of storage. Not everyone will enjoy reading this. But if you like your mysteries to be more like procedurals with a determined and fierce character - Kinsey Millhone is for you.


Well there you go, Kinsey has family on the dad's side. I really wish she would've gotten a chance to meet Terrence. She's right in one sense, too many of her goodbyes are final ones. Although I guess she didn't actually get a goodbye for this one. And I actually really wanted her to investigate the crime he was convicted of. I mean, I didn't mind how it turned out - I ended up not hating Pete (although mostly cause of his wife) and I loved the conclusion of the gun switch. That part was hilarious. but it wasn't what I was expecting. Still it was enjoyable. There's a tiny bit of romance in this one - Dietz is back, Cheney is back - I still hate both. I could do without the romance.

I loved William's dramatic streak - and the cat! - it had me in hysterics. Poor Henry getting saddled with the cat that tripped Nell. On the other hand - William was clearly spot on - and it was perfect for Henry to have some company.