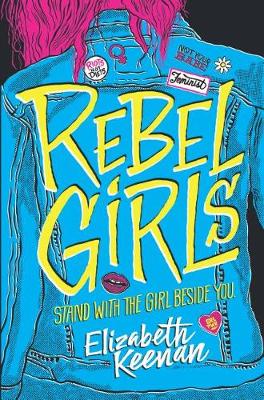 That was. Just such a wonderful book. Reminds me a little of Exit, Pursued by a Bear in that it's about a not that great situation but deals with everything nicely and leaves you feeling hopeful at the end.
Disclaimer: I received this book for free from NetGalley and Inkyard Press in exchange for an honest review. This does not affect my opinion of the book or the content of my review.

I LOVED this book. I feel like it did a pretty good job of filling the hole Moxie left behind when I finished that earlier this year. It’s smart, the characters are great, and it doesn’t hesitate to take on a difficult topic.

Before I go and squeal about it some more, I do want to leave some possible trigger warnings for the book, and turn-offs, depending on your politics. Rebel Girls discusses extreme bullying, and there is one scene where a character’s locker is covered in graphic images of unborn fetuses. Additionally, one of the themes of this book is the abortion conversation and it found it leans to pro-choice. If you are a pro-life supporter, you may find parts of this book offensive, depending on your comfort levels in the discussion.

Rebel Girls is set in Louisiana in the early 90s. Our protagonist, Athena (thanks, Mom), loves the Riot Grrl revolution, but she goes to a strict Catholic School and they aren’t always supportive of her ideals. On the political spectrum, Athena swings left but she’s not outspoken and forceful about it (though she definitely wants to be). I liked Athena a lot as a character because she was so well-balanced. I think it’s easy to write characters who are fierce and brave, but characters who want to be but have insecurities but still try are the ones who really speak to me. Also, Athena felt like a younger high schooler. She gets all flushed and gooey talking about her crushes and has idols and has fixed love/hate feelings for her little sister.

When this book quickly became political, I was extremely worried it was going to be a one-sided soap box. While it may not have been perfectly balanced, Rebel Girls made a good effort. My experience with extreme left and extreme right opinions on any controversial topic is that they tend to villainize the other side. Although Athena is a pro-choice character, it was so important that her little sister was a pro-life character… and that they didn’t cancel one another out. Athena and Helen stuck to their believes and managed to work together despite them. It’s an interesting commentary, and I think given exactly how hot a topic abortion is right now, it was important that Elizabeth Keegan did this correctly.

I will say that the villains in this story felt like caricatures. Leah and Aimee were so blatantly ignorant and selfish that I figured something must be wrong – but no, they were just various much like Marianne from Easy A. That type of character drive me crazy. There’s never tolerance – always extremism in interactions. Because of characters like these and Mrs. Turner, it’s so important to have foils like Angelle, Helen, and Sister Catherine. There’s actually a couple really lovely moments with Sister Catherine in the second half of the book, making her one of my favorite characters.

There was so much focus on the plot and politics in this novel that the love story was extraneous. Romantic scenes seemed like setups to further the main plot in small ways rather than to push forward the relationship itself. They weren’t bad, but they felt more like filler to strengthen the evilness of Leah and Aimee than anything else.

Generally speaking, I really liked Rebel Girls. I liked the controversial topic and the different characters (some of the minor characters were really great) but I do wish there had been a little more variety in the political stances. Even if you don’t agree with something, I do think it’s important that everyone has a voice. That goes for both sides of the line. That aside, it was a great story with some really good lines and Louisiana in the early 90s was a fun stop – I wish there were more YA in the 80s and 90s because I am here for it.