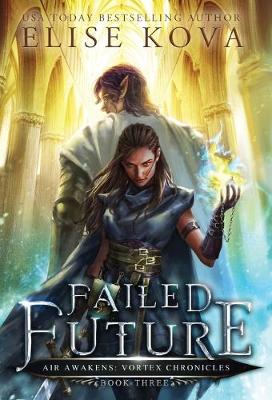 When worlds collide, and things are rarely what they seem, there may be no one Vi can trust.

Having forsaken her crown for a chance to save her family, and the world, Vi Solaris washes up on the shores of Meru. She’s wounded and barely alive. But Vi’s fight for survival is only just beginning.

As a princess in a foreign land, everyone is after her.

The pirate queen Adela wants to sell her to the evil elfin’ra. The Twilight King wants to use her to settle an old score. And, perhaps most dangerous, is the scheming Lord of the Faithful who sees her as an opportunity to further consolidate his power.

The only path for Vi is forward. But she doesn’t yet know if she’s running toward salvation… or a brutal end to everything she loves.

Vi’s journey continues with even more betrayal, romance, magic, and a twist you never saw coming that leaves readers begging for the next book.

With a name liked Failed Future you got to know a huge shift is approaching in this third installment of the spin off series from Air Awakens. This book is very emotional between our main characters Vi and Taavin who are on what seems impossible task to rescue Vi farther. Two characters who are from very different lands who are trying to save the world. Two characters who think they know all their is to know but as you read this incredible twisting novel you find not all is as it seems.

Vi opens herself to many people and puts a lot of trust in them but she ends up getting betrayed by those she never thought would betray her. Their a lot that happens on this journey to rescue Aldrick and by the time your at the end of the book your so far from where you started that just like Vi your not really sure where you are. I am very excited to continue this tale in book 4 Sovereign Sacrifice due out October 15, 2019.