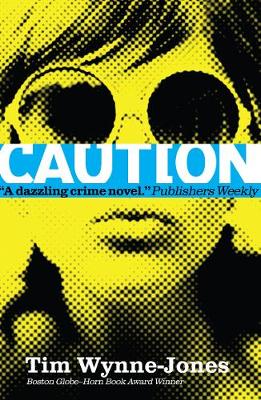 Two street kids get tangled in a plot over their heads – and risk an unexpected connection – in this heart-pounding thriller by Tim Wynne-Jones.

Boy, did Blink get off on the wrong floor. All he wanted was to steal some breakfast for his empty belly, but instead he stumbled upon a fake kidnapping and a mobile phone dropped by an “abducted” CEO, giving Blink a link to his perfect blonde daughter. Now Blink is on the run, but it’ll be OK as long as he’s smart enough to stay in the game and keep Captain Panic locked in his hold. Enter a girl named Caution. As in Caution: Watch Your Step. She’s also on the run, from a drug-dealer boyfriend and from a nightmare in her past that won’t let her go. When she spies Blink at the bus station, Caution can see he’s an easy mark. But there’s something about this naïve, skinny street punk, whom she only wanted to rob, that tugs at her heart, a heart she thought deserved not to feel. Charged with suspense and intrigue, this taut novel trails two deeply compelling characters as they forge a blackmail scheme that is foolhardy at best, disastrous at worst – along with a fated, tender partnership that will offer them each a rare chance for redemption.