The Infinite (Gates of Thread and Stone, #2) 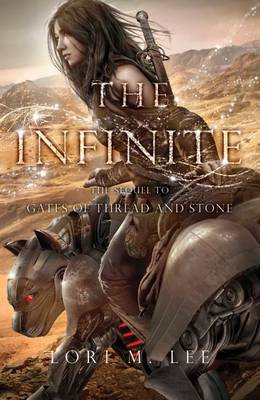 The Infinite (Gates of Thread and Stone, #2)

The walls of Ninurta keep its citizens safe.

Kai always believed the only danger to the city came from within. Now, with a rebel force threatening the fragile government, the walls have become more of a prison than ever.

To make matters worse, as Avan explores his new identity as an Infinite, Kai struggles to remind him what it means to be human. And she fears her brother, Reev, is involved with the rebels. With the two people she cares about most on opposite sides of a brewing war, Kai will do whatever it takes to bring peace. But she’s lost her power to manipulate the threads of time, and she learns that a civil war might be the beginning of something far worse that will crumble not only Ninurta’s walls but also the entire city.

In this thrilling sequel to Gates of Thread and Stone, Kai must decide how much of her humanity she’s willing to lose to protect the only family she’s ever known.

I felt like I was being moppy reading The Infinite jjust like Kai was being a little bit in the book. I was really sad about Avan too. I loved him in the first book and I felt like I missed the old him in this one.

Kai really has to rely on herself more because she is on her own. Avan is now an Infinite and his memories are locked away in him somewhere, Reev although still there, seems to be more distant. Kai has also lost touch with her powers. It’s almost like defeating Nanu has made her a whole new person that she has to get used to. Plus she still has her the whole taking over for Kronos thing looming over her. Whether she want’s to become a full Infinite or not.

We have all the characters again with Irra, Kallas, Reev, Mason and Avan. There are also some new interesting characters.

I have enjoyed the world that Lori has created and the role the Infinite play in it. Now that the borders are down, it’s able to be more expansive and other cities are reaching out. This gives Kai the opportunity to find a way to breath again by breaking out and exploring. What she finds though is definitely more than she bargained for. I loved the plot because we get a larger look at the world but I also loved how much it really focused on Kai. It’s also kind of sad though but it’s that kind of sad that makes sense and even though it’s sad it’s also kind of good for Kai too.

We are introduced to some new powers but I definitely love Kai’s ability to control time. I’m glad that we get to see more glimpses of what should could be able to do if she trains with Kronos.

Second books are hard but I really feel like The Infinite is a great addition to Gates of Thread and Stone. It manages to continue the story but add new elements to make it interesting. Although I felt a little sad at times, I thought it was really good.

The Infinite was an exciting sequel, although it did start off kind of rough. It's three months later, and Ninurta is in a state of unrest. The citizens are not happy with the new Kahl and a rebel group has formed. Then a strange person who claims to be from a city in the north appears. She pleads for help in fighting off the chimera who are terrorizing her people. Kai and the others are excited by the prospect of not being alone, so they send a party out to help in Lanathrill. But, of course, things aren't always as they seem.

I'll start with why The Infinite and I got off to a rocky start. Kai is cut off from her magic. That's not a spoiler, as it's in the blurb. But why?! How is she (and us) suppose to learn more about her abilities if she's blocked from it!? And there's no satisfying explanation as to why this happened! It just seemed like a convenient plot devise, since Kai wants to remain human instead of being her father's heir. Of course, things happen later that cause her powers to come back full force, but what was the point of them being gone in the first place? It was just annoying.

Anyway. A lot of exciting things happen in The Infinite! First, we get to see the world outside of Ninurta. The world wasn't quite as devastated and Kai and her people thought. There are thriving communities scattered about, and most of them are being threatened. Either by the wild chimera or by other cities. Basically the entire world is in chaos! There is a lot of waiting, since Kai has to wait for messengers, and then await back up, and wait for this or that. But it's not boring, since we get other stuff. But then very bad things happen! Very bad! I was like, noooo! It's seriously cruel and took me by surprise. Then more bad, shocking things happen! What in the world is going on! Kai just cannot catch a break!

The Infinite also continues to torture us with its lack of romance. Avan is much different than he was, but Kai isn't willing to give up on him. He may not remember her, but sometimes he remembers how he felt about her, so there is some kissing! But ultimately, they can't be together because he's not himself! Boo! There are kind of hints of a love triangle, but not really. Kai only feels friendly toward Mason, but I was kind of hoping she could find happiness with him. But really, I'm totally behind Kai and Reev. No, this does not happen, since he's kind of her brother, but I feel like they have a much stronger connection than she and Avan or Mason. I know it'll never happen, but a girl can dream.

The Infinite was a pretty good sequel. The second half was much better than the first, since important things finally started happening. Lots of betrayals and switching loyalties, and who's on whose side?! Clearly, war is imminent. Kai also seems to finally be stepping up. She had been a great leader thus far, but as a human. It's finally time for her to embrace her powers so she can really help her people!

Gates of Thread and Stone (2 books)