The Brothers York: A Royal Tragedy 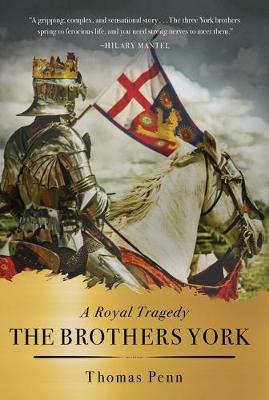 The Brothers York: A Royal Tragedy

SELECTED AS A BOOK OF THE YEAR 2019 BY THE GUARDIAN, DAILY MAIL, SUNDAY TIMES, DAILY TELEGRAPH AND BBC HISTORY MAGAZINE

'A gripping, complex and sensational story, told with calm narrative command ... With insight and skill, Penn cuts through the thickets of history to find the heart of these heartless decades.' - Hilary Mantel

'Thrilling, pacy ... Brings a novelist's verve to his telling of events.' - John Gallagher, The Guardian

It is 1461 and England is crippled by civil war. One freezing morning, a teenage boy wins a battle in the Welsh marches, and claims the crown. He is Edward IV, first king of the usurping house of York...

Thomas Penn's brilliant new telling of the wars of the roses takes us inside a conflict that fractured the nation for more than three decades. During this time, the house of York came to dominate England. At its heart were three charismatic brothers - Edward, George and Richard - who became the figureheads of a spectacular ruling dynasty. Together, they looked invincible..

But with Edward's ascendancy the brothers began to turn on one another, unleashing a catastrophic chain of rebellion, vendetta, fratricide, usurpation and regicide. The brutal end came at Bosworth Field in 1485, with the death of the youngest, then Richard III, at the hands of a new usurper, Henry Tudor.

The story of a warring family unable to sustain its influence and power, The Brothers York brings to life a dynasty that could have been as magnificent as the Tudors. Its tragedy was that, in the space of one generation, it destroyed itself.