Under a Painted Sky 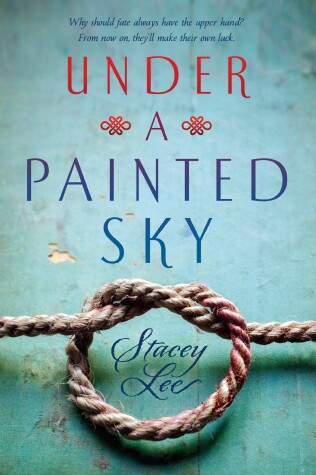 Under a Painted Sky

From the New York Times bestselling author of The Downstairs Girl, Stacey Lee's debut novel is a powerful story about love, friendship, and sacrifice, perfect for fans of Code Name Verity.

“This moving novel will captivate you.”—Buzzfeed.com

All Samantha wanted was to move back to New York and pursue her music, which was difficult enough being a Chinese girl in Missouri, 1849. Then her fate takes a turn for the worse after a tragic accident leaves her with nothing and she breaks the law in self-defense. With help from Annamae, a runaway slave she met at the scene of her crime, the two flee town for the unknown frontier.
But life on the Oregon Trail is unsafe for two girls. Disguised as Sammy and Andy, two boys heading for the California gold rush, each search for a link to their past and struggle to avoid any unwanted attention. Until they merge paths with a band of cowboys turned allies, and Samantha can’t stop herself from falling for one. But the law is closing in on them and new setbacks come each day, and the girls will quickly learn there are not many places one can hide on the open trail.

Under a Painted Sky is an emotional coming-of-age tale set against the vibrant backdrop of the American Wild West that spotlights the uplifting power of sisterhood and the edifying nature of female friendships.

♀️ The Female Friendship! The most beautiful note Stacey Lee manages to hit in this book is the sweet vibrato of sisterhood that naturally develops between Sammy and Andy, two teenage girls on the run from the law. The way they bond, support, uplift, and sacrifice for each other is, without a doubt, the soulful heart of this touching story.

🏜️ The Wild West Setting! As somebody who's interest in cowboys extends about as far as Toy Story's Sherif Woody, I was skeptical that this book would be my jug of maple syrup. But I loved Stacey Lee's The Downstairs Girl so darn-tootin' much that I decided to give it a try anyways. Once again, Lee cast her black writing magic and completely enchanted me into enjoying a genre that I typically avoid like cholera. By the end of this delightful frontier adventure, I was hollering, "Yee-haw! Ride 'em cowboy!" like the cattle-herding gunslinger that I most decidedly am not (but now sort of wish I was).

👪 The Found Family! In a desperate bid for freedom, Sammy and Andy take refuge with a group of three strapping young cowboys traveling to California – the stoic West, his skirt-chasing cousin, Cay, and Peety, whose love of horses eclipses almost all else. At first, I thought that these three boys were your generic cookie-cutter characters. I assumed that they were tossed into the narrative mixing bowl just to add a dash of romance and a pinch of teenage angst. Boy, was I wrong. Each cowboy is endearingly flawed, painstakingly nuanced, and plagued by his own set of demons. Together, these five create an unforgettable family dynamic that vaporized my heart into a pile of goo.

👔 The "Girls Disguising Themselves as Boys" Trope! So, I might or might not have hummed, "I'll Make a Man Out of You," incessantly while listening to this audiobook. (And possibly envisioned a shirtless Shang more than once because…of reasons.) But iconic Disney power anthems aside, this is an all-time-favorite trope of mine that I regularly encounter in YA Fantasy. Seeing it play out in a genre that I'm less familiar with was nothing short of a delight.

💛 The Romance! Although I like both Sammy and West's characters individually, collectively, I was unimpressed with their relationship. Rather than sharing an electric spark of chemistry, their interactions held a charge as weak as a dying iPhone's. And while I liked the idea of their romance, the actual execution felt stilted, awkward, and even a bit forced to me.

“The clouds. They never hold still. Sometimes you think you’re seeing one thing, and a second later, the whole picture changes.”

— Not my type of book, but wow this was breathtaking. Heartwarming camaraderie, amazing character development, and beautiful imagery. Love it!
Page 55. That's how far I attempted to get before calling it quits and adding this as my first DNF of the year (and quite frankly, I can count on one hand the amount of DNF books ever for me.) Not only within the first 20 pages did she lose her dad and home to a fire, but then is almost raped and kills the man who tries to--which okay, yes, awesome--but all of that? In 20 pages? That's not fast pacing, that poorly executed writing. I persevered, trying to get past my qualms with how Lee plots a novel, but when they meet the potential love interest* with the name of Cay (short for Cayenne Pepper, and I am not kidding you) I put that book down.

I couldn't do it. I cannot do it. Sorry not sorry. On to something else.

*I have no clue if he is because I didn't finish, but the jacket copy does mention banding together with some cowboys.